Sharon loaded up her shuttles with her favourite snowflake colour, Blue Ice, to help a friend tat the Betsy snowflake. She has included on her blog the steps in the snowflake's construction and after tatting the first one in size 10 thread, she did it again in size 20. 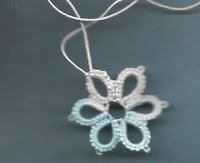 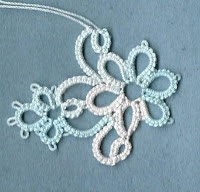 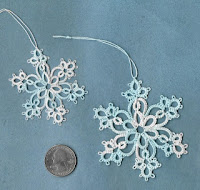 Elsa has spent her time researching old books and articles that show other lace techniques combined with tatting. This model is shown in Fig. 571 of the 2nd edition of the Encyclopedia of Works of Ladies of Therese of Dillmont, which combines tatting with crochet and she worked it with a Lizbeth 40 cord and the special lace cord DMC 80. 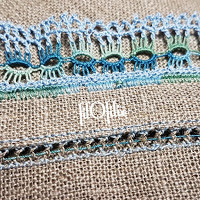 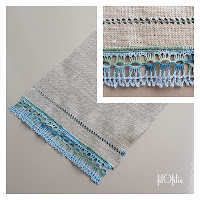 Melanie started this project some time ago, but it's slowly taking shape. The unusual joins of the rings to the base of the ring on the previous row gives a much more stable fabric than the typical join to the chains. The finish line is in sight, all she has to do is tat and add the stars.

Cindy was dared by Fox to try tatting a button motif and she finally did it using her favourite colours of brown and turquoise. Her first try gave her nothing but knots so she decided to try it without the beads and things were going great until she joined into the wrong hole. She did finally complete it, and now on top of fabric, beads, gems and charms she might stray into collecting buttons as well. She's still working on making lucky pennies for a few brides and babies, but having a hard time finding 2017 pennies until a kind tatter offered to send her some. 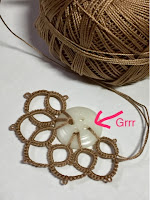 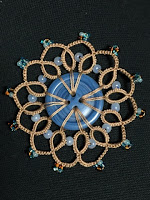 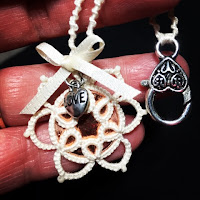 Diane tried starting a new doily, but after some foolish mistakes she left it in favour of Ice Drops, first in  Caribbean with a blue glass gem. Then in pink with a pale yellow ribbon. Followed by a Green Coral Sea and orange glass gem combo. It all started with one little motif from New Tatting by Tomoko Morimoto. Then she tatted a few more and ended up with the Hydrangea Doily in New Tatting. Caribbean blue with a pink glass gem, and pink ribbon Ice Drop. She started the Hanging Garden doily and the first round, is the most complicated. She finished the second round of the Hanging Garden doily from Tatting lace with your life and likes the way Azalea Lt and Green Coral Sea look together. She pulled out her ball of Pink Cocoa and she did crave chocolate and strawberries while tatting. 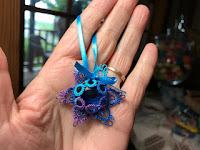 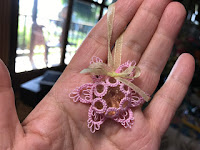 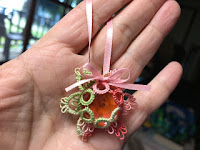 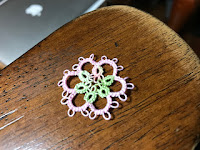 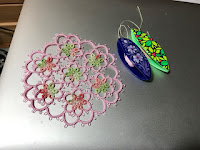 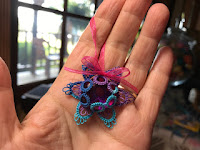 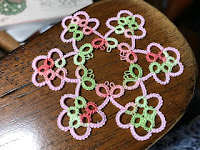 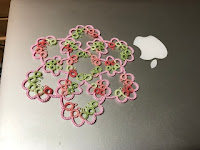 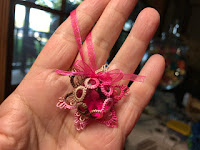 Marie finished this round and has one more to go. Now to block it. Six hours later it's all blocked out to 28.5 inches, and looking gorgeous. This pattern from Nancy, at Be-Stitched makes a lovely trinket box. 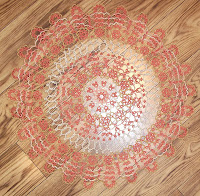 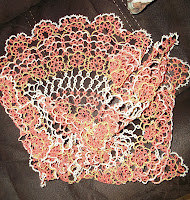 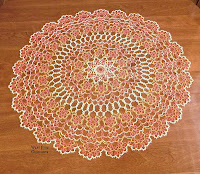 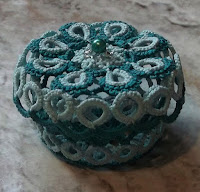 Martha is working both ends toward the middle on this yoke. Only 14 motifs to go! This is going to be spectacular. 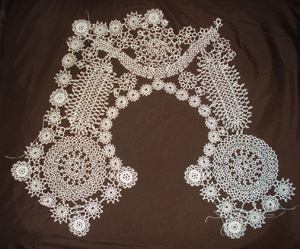 Muskaan thinks this pattern was initially intended to be something like a bracelet or a bookmark. 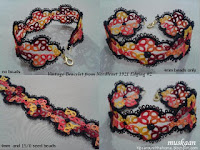 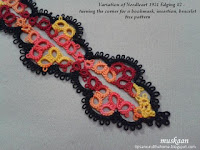 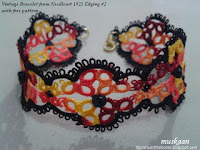 Sue had these beads which she bought from Fire Mountain Gems a long time ago and wanted to make something with them.  The label on the beads says  BEAD GLASS SEA OPAL 4MM and she had Lizbeth size 40 Coral Splash on a shuttle already so off she went. 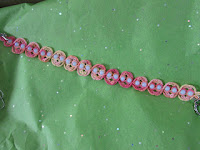 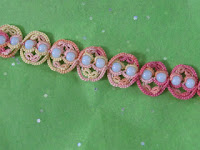