Usha has created a star medallion which she named Fusion Elegance that incorporates tiny dots and tiny dainty dot picots. She has included instructions and the PDF pattern on her blog. 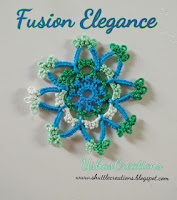 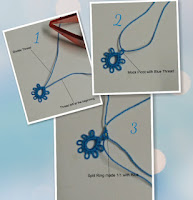 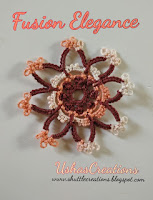 Diane was working on her Spring Garden Ice Drop and got to thinking about how she could modify it. So the Bloomin' Ice Drop pattern was born. Instructions for it are on her blog. It was so beautiful, she had to make another. She decided that patriotic red, white and blue colours for Ice Drops, were an appropriate choice for Independence Day. 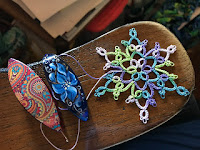 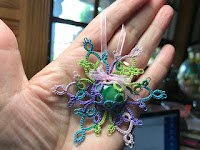 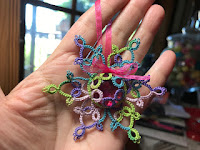 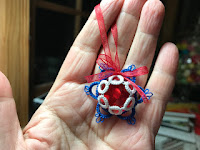 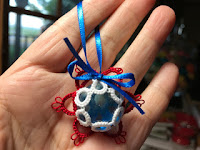 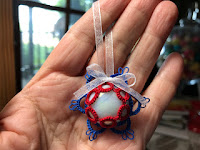 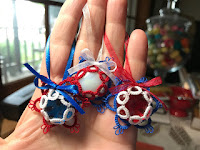 Margaret tatted her own red, white and blue Ice Drop using the Ice drop pattern by Marti Miller and substituting blue beads for the blue thread.

Marie test tatted Usha's "Fusion Elegance" in size 20 Lizbeth thread. She did some embellishment tatting around a triangular pendant to make a one of a kind treasure. This motif was useful for emptying shuttles. 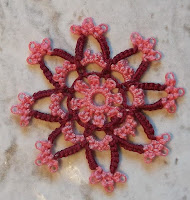 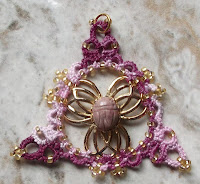 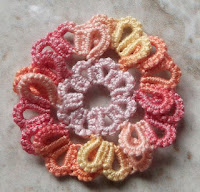 Martha is still working on the Phyllis Sparks yoke, and she wanted to do the small motifs around the end to make sure they would fit. Thankfully they did and you can see here motifs number 1, 2, 3, 4, 14, 15, 16, and 17 which is starting to look like the final product. 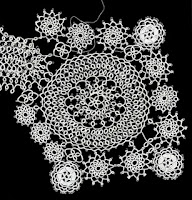 Nikki tatted the star which is based on an Anne Orr edging which someone modified into a star and Nikki used  a red thread that seemed to be 2 different colours when it was done. She enhanced it with glitter glue which camouflaged the difference. !4 cards were sent out to family with these little gems. She's  working on another doily using Artiste thread in Coal black and dawn rose. 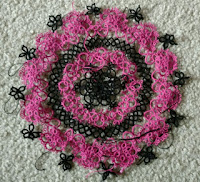 Sue made these Ice Drop earrings in white and she had intended to add some tiny iridescent beads, but she forgot to put them on the ball thread before she started, so she pulled the ball thread through the tiny beads then slipped the shuttle through the loop, slightly snugged the bead into place and then tatted the rest of the chain. She is making progress on widening the "tail" of her tablecloth and eventually it will all be the same width. Sue figures these Christmas Ice Drops will make great ornaments for Christmas trees. Here's another Christmas Ice drop using the same pattern. 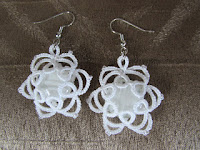 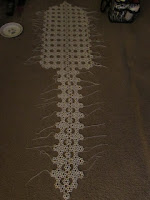 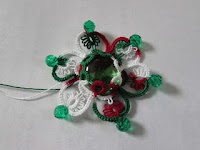 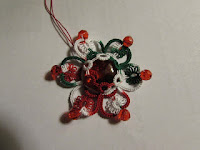 Wanda was going to make earrings, but she changed her mind and made red, white and blue butterflies. She discovered while handling them that the butterflies don't have to lie flat, they can be posed with their wings up.