Sue has recently got Heidi's reprint of Dora Young's book and she has been tatting, although with her plans to hit the pub the tatting might come out a little wonky. 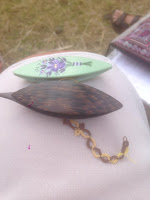 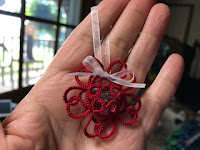 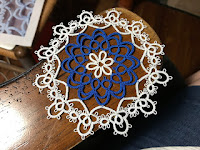 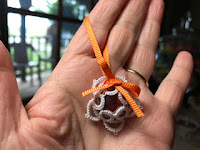 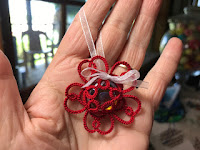 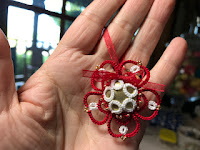 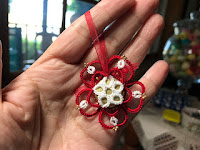 Fox shares a, hot off the shuttles, design by Karey Solomon done in size 40 Lizbeth which matches her new shuttle from La Cosette on Etsy. 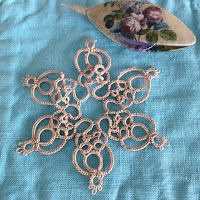 Marie found a tote full of blank settings and turned this one into a pendant. One of her favorite crosses from Lene Bjorn was great for using up thread on her shuttles.

Muskaan tatted the four shapes derived from the initial design hack in size 40. Now she has tatted all 4 shapes in size 20 to determine picot size before she presents the final pattern. These are the various Quatrefoil Triangle trials. Arranging the triangles into a hexagon – it makes a nice coaster in size 40 and can be tatted in one pass. She retrieved trials #4-6 from the hexagonal scrapyard – sewed them in layers, added a bead and created a 3D flower. 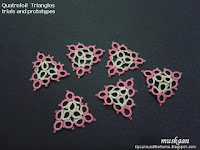 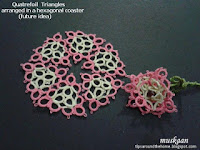 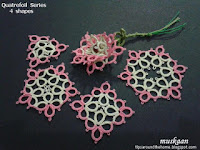 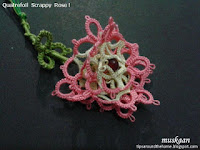 HisKid has her second Ice Drop Suncatcher done, this one in Lizbeth size 40 Niagara Falls, with a blue centre gem, tiny blue beads, and a matching blue bangle bracelet. It's shown here with the first suncatcher. And here are the backs. She also shares pictures of the Tollway Tatters gathering. Ana's project from one of Yarnplayer's books is like a hair scrunchie. Ann's project. Barb's project. Diane working on her red and white Tudor Ice Drop. Sue Anna was wearing colourful earrings which are one of Marilee's designs and she was working on another of Marilee's designs making Steampunk Earrings. Sue (His Kid) brought along her tablecloth and added another 4 motifs to it. Diane brought her Renulek's Spring Doily out to show and get photographed. 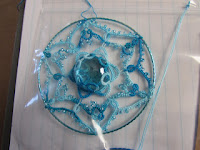 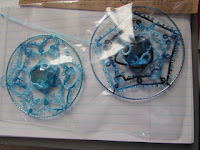 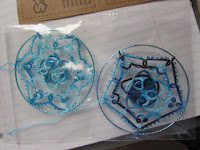 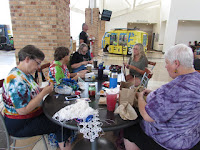 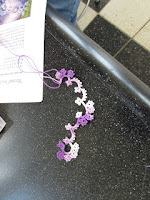 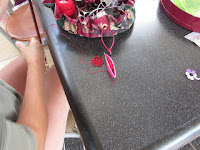 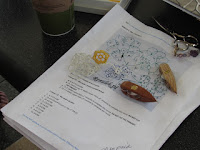 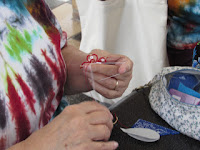 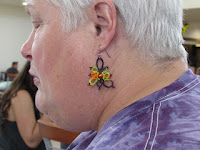 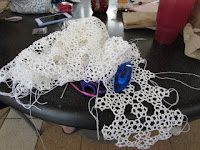 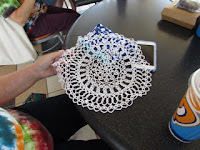