Usha has created this beautiful Dreamcatcher flower motif that incorporates her dot picots and woven rows for a textured design, in which the middle is worked first. The second (outer) row uses the dot picots. The 3rd row is tatted over the middle row. Round 4 works in toward the centre of the motif joined over base of the rings of Round 1 using only single shuttle. Round 5 the centre of the motif is tatted over base of rings of Round 4 with only single shuttle. 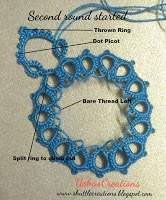 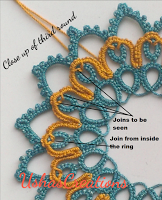 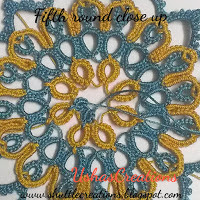 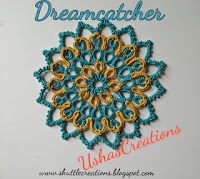 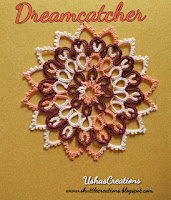 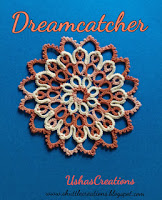 Vera is working on Renulek's 2017 doily and each row is taking longer and longer to complete. The thread is Puppets Eldoradó 16 (the name sounds like it lost something in the translation). 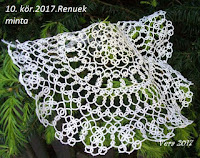 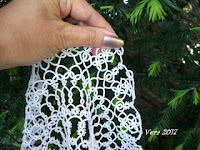 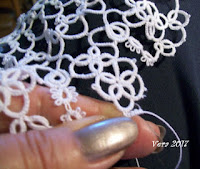 Mistene is on to round 4 of Renulek's Spring 2017 doily which she's been tatting in Marilee's size 20 Sugar Maple HDT. The colour is gorgeous but she's wondering if she'll have enough to complete it. If not she may go with a contrasting colour for the outer rows. Round 6 is done but not blocked and looking lovely. Mary Konior's Queen of Hearts from Tatting with Visual Patterns is tatted in Lizbeth colour 140, County Grape Swirl, size 40 using front side/back side tatting. 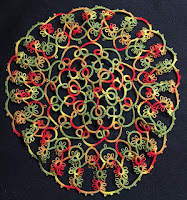 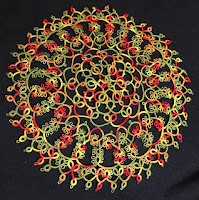 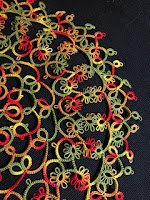 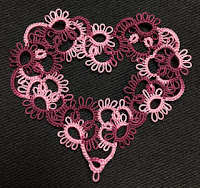 Melanie attended a conference on weaving with neutrals which she enjoyed very much and her variation on Diane's Ice Drop was sold at auction although it didn't bring in as much as she hoped, but the comments she got on it were very encouraging. 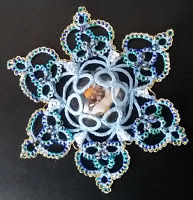 Diane has been subbing and weaving, which hasn't allowed for a lot of tatting time, but she did tat one Ice Drop. She got another Ice Drop finished to add to her stash, in between bouts of weaving. Another 4 Ice Drops have been completed. 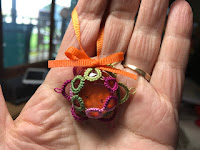 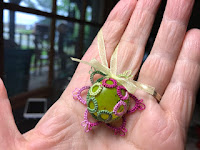 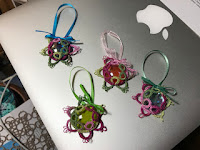 http://www.tat-ology.blogspot.com/
Fox is on the 10th row of her lilac doily and she's enjoying using her new shuttle. 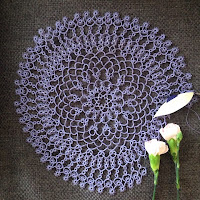 Marie tatted a beaded bell using Monica Hahn's pattern from Christmas Angels and Other Tatting Patterns. One of her favourite patterns by Lene Bjorn tatted in a thread that has a gold and iridescent filament. Another favourite cross pattern from Lene. Another one from "Tatted Bookmarks: Crosses." 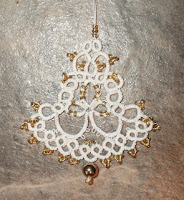 Muskaan tatted Annette Snowflake adapted from Annette in Tatting Patterns and Designs by Blomqvist and Persson. She shares her tips for tatting this design in 2 colours with front side/back side tatting. Sally’s Bugle Snowflake by Jane Eborall lends itself to a plethora of colour combinations in threads and beads. Her notes and thoughts are included on her blog. 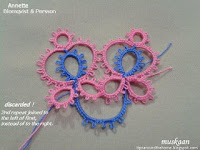 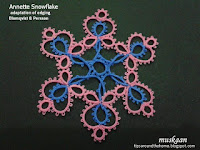 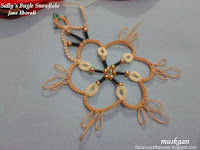 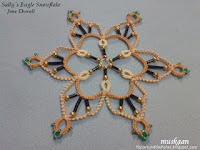 Nikki finished her 4th doily, Renulek's Wiosna 2015, tatted in Artiste thread in #10 Wild Berry and black and she's hoping that pressing the doily will help it to lay out flatter, as it has a tendency to bunch. She wanted a quick cross pattern to pop in a letter to her mother in law and selected a Mary Konior design and some thread already wound on her shuttles. In her haste she dropped 4 chain stitches and decided to go on to a different pattern. This tiny, but perfect cross isn't what she had in mind, but she's hoping it's the thought and not the size that will count. Sue did another test tat for Elaine P. Gan of the Life Cross and although the pattern is fine, she's not happy with the way it turned out. Here it is again looking better. She loves this design by Elaine P. Gan called Easter Cross tatted in Lizbeth size 40, Elderberry Jam. It requires attention, but looks lovely. Elaine P. Gan's Primrose Cross is done in Lizbeth size 40 Elderberry Jam, but since she wasn't feeling very well, she had problems with the directional tatting. Heartfelt Cross is tatted in size 40 Lizbeth Lemon Yellow
to empty another shuttle, but again she's not feeling well and not satisfied with her tatting results. 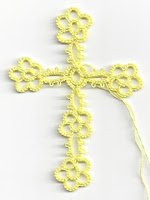 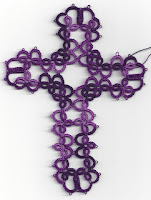