Usha is still playing with colour and style to make her lanyards. Sky blue Anchor thread size 20 is used for her 7th lanyard which features split rings tiny shiny white beads and big blue bead between. The next one uses Grey Anchor size 20 thread with golden bugle beads and black seed beads. Followed by a lanyard that uses the same design as her 6th one. 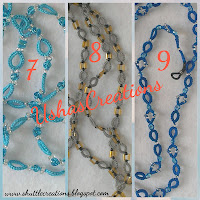 Vera has been working on Renulek's Spring 2017 doily rounds 6 and 7 and she's made great progress. These lovely Easter eggs show to great advantage how to turn edgings and motifs into delightful ornaments. 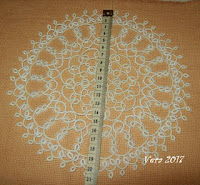 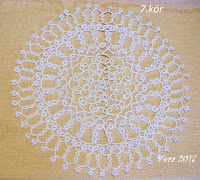 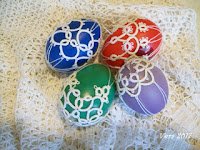 Cindy finally branched out to another variation of the Ice Drop and she doesn't know if this one has a name or not, but she likes it. The bright sunshine gave her a nice backdrop to photograph this selection of Ice Drops. 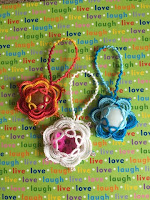 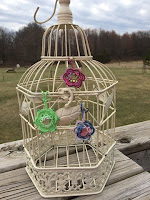 Diane found that lovely weather outside gave her a chance to open the windows, blow out the stale air and sit and tat, Ice Drops, of course. Sounds like a perfect day to me. Her glass gems have been sitting out in bowls looking pretty, and getting dusty, so she washed them all of and stored them in mason jars where they look just a pretty, but take less dusting, which of course gives more time for tatting. Red gems with white lace and different coloured ribbons make for gorgeous Ice Drops. This is her Blue Fudge pattern with a slight variation of chains on the final round  shortened from 9 to 7 stitches because she was afraid of running out of thread. She finished off a couple more Ice Drops in white just as her daughter and grandkids arrived so Sophie chose the blue ribbon to go with this one. This is one of Marilee Rockley's hand-dyed threads and those HDTs just can't be beat for the pizzazz they add to tatting. 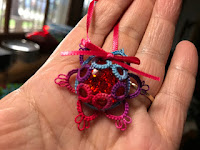 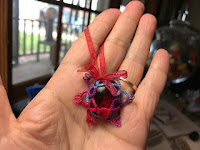 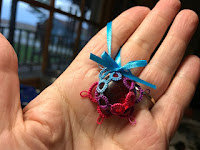 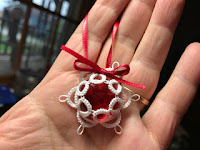 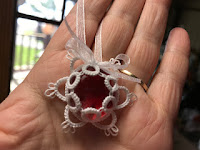 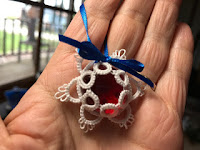 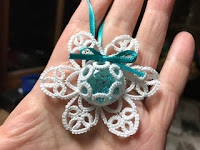 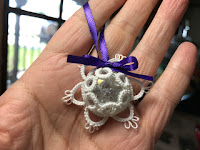 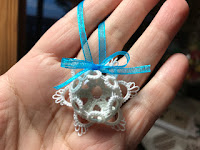 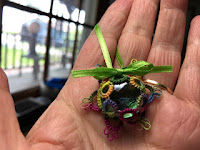 Fox found Row 9 took lots of attention and lots of untatting (and I bet a few choice words), but is is ever pretty. 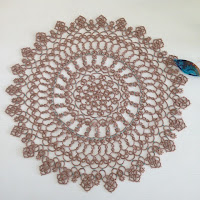 Marie was given some crocheted egg parts by her aunt a completed them by sewing them around plastic eggs and adding decorations to the middles. Tatted flowers, tatted bits with beads, tatted motifs and little doodles are some of the scrap pieces she put to good use.

Muskaan took her marigold braid, her mustard fields and her Jasmine braid and joined them together to make one intricate design. 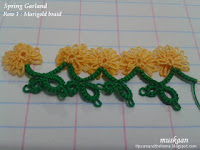 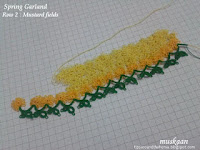 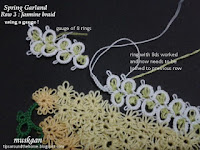 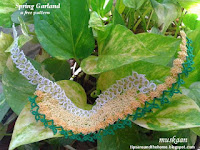 Sue has tatted enough motifs to stretch the length of her table which makes it seem like it's so much closer to being done, except the to make it fit across the table and hang down a foot on each side means it's going to take a gazillion more motifs. Stay tuned for lots more progress. She also tatted 2 more rainbow crosses using the Big Cross pattern in size 10 thread from Tatting Patterns & Designs by Gun Blomqvist and Elwy Persson. The pink one is Resurrection Cross from Elaine P. Gan tatted in size 40 Lizbeth Pink Blossoms. 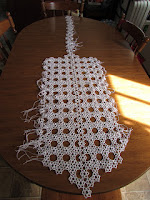 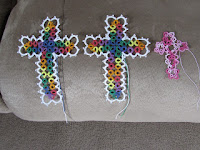 Wanda had brown Lizbeth #698 size 10 on shuttles already, so she used that with white Lizbeth #601 size to make the bunny. The head is a ring, the body are chains, and the tail is a Single Shuttle Split Ring. The one without the tail is her first one seen from the front with paws. She plans on using these on bookmarks or cards and she'll glue them so that the little  knot doesn't show. 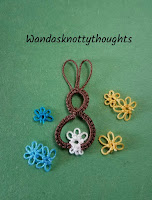