https://shuttlecreations.blogspot.com/
Usha tatted Nina Libin's Heart for Kay pattern, then she did it again with Catherine wheel joins. The smaller dot picots aren't quite as frilly and small picots have a nasty habit of disappearing over time as use ans washing shifts the thread. 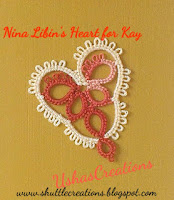 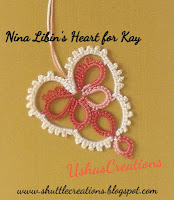 http://lacelovinlibrarian.blogspot.com/
Diane has been starting an Ice Drop at night and finishing it in the morning which always makes her feel like she has accomplished something, even when she's rushed. Being familiar with the pattern means she can mostly tat on autopilot which helps when she's subbing and minding the kids while they finish their school work and is responsible for the fact that she got 3 Ice Drops finished. Another Ice Drop is completed in Marilee's size 20 Candy Mint HDT. And another Ice Drop in Candy Mint, but she thinks she'll keep this one. still enjoying tatting with my skein of Candy Mint hand-dyed thread. She wasn't sure if a red glass gem would look right, but it works for her. This Ice Drop features a clear crackled glass gem and she loves that it picks up the thread tones. Her friend Sue suggested a pattern for an Ice Drop, but she misread the directions and came up with this. The second attempt at Sue's pattern wasn't much better, although the first round is more what Sue had in mind, and she played with the second round, which really did nothing to enhance the bead she used. 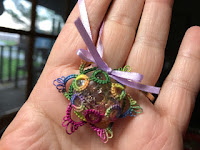 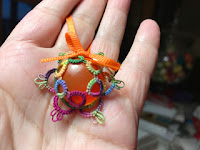 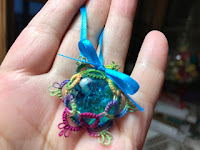 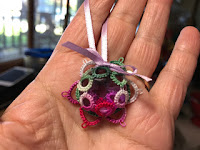 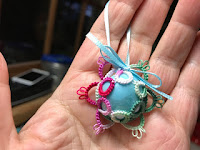 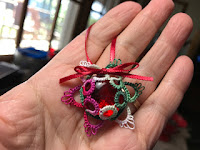 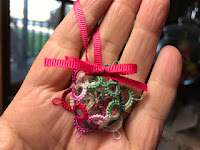 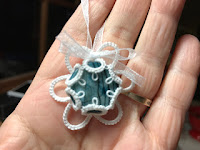 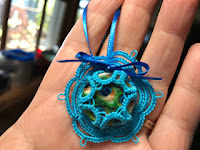 http://www.tat-ology.blogspot.com/
Fox thinks this is maybe the prettiest of Renata's patterns and she's enjoying working with the size 40 thread and really liking the look of the darker purple beads she used on this round. Here's how it's looking so far. 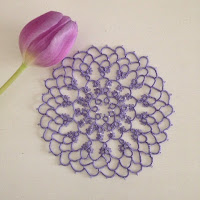 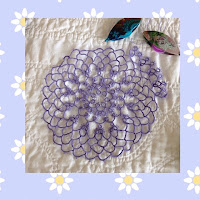 http://hiskid66.blogspot.com/
Sue received some laser disks and used them on one of Diane's Ice Drops. It didn't quite come out as planned, but it still looks great and didn't waste any precious HDT. It looks pretty both front and back. She tried again to make the beautiful blue flower "gem" into an Ice Drop.  She decided to try her own idea, but this bit didn't work as planned. This blue gem was a gift from a friend that she paired with size 40 Blue Ridge HDT. Another sparkly laser disk Ice Drop tatted around with size 80 Lizbeth Razzle Dazzle
and small purple beads. She started with the back, but she tatted the long chains, then when she tatted the front she tatted the small chains but she thinks the next time she will try to tat the small chains like Diane's original design. Another wanna-be Ice Drop in her own design, tatted in size 40 Lizbeth Tropical Punch. 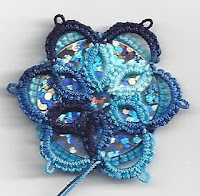 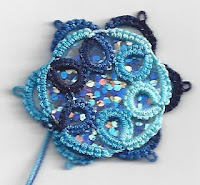 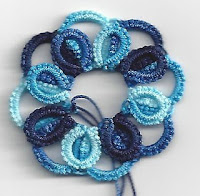 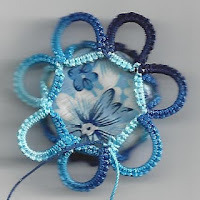 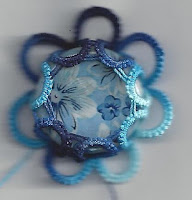 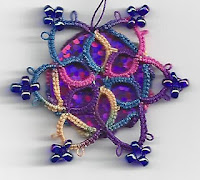 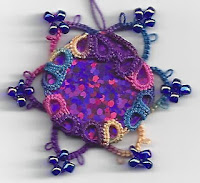 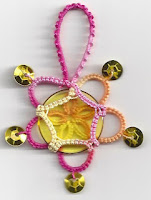 Hi. Would you add me again please? Trying to be a better blogger. http://mistenetats.blogspot.com/