Mistene likes how her Renulek's Spring 2016 Doily is coming along but it's still curling. She hasn't done any blocking and hopes it will start to flatten out. 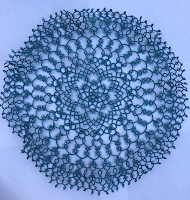 Pop Maria is continuing with the Craftree challenge and tatted Lene Bjorn's Fourteenth Day of December, which isn't her favourite snowflake but she enjoyed working it. She felt the need to make something more geometric and tatted Amethyste by Pascale Provost in white a her own HDT in shades of pink. 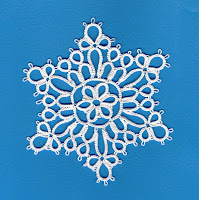 Nikki mailed off her 4th of July projects she had been working on for a while, late, but finally sent. She made 18 of these little stars using a pattern called Twinkle Twinkle by Joelle Paulson done in red white and blue. 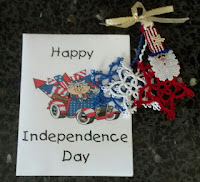 Sue decided to make the patterns in the Ring of Tatters DVD's and here's the first in the techniques. 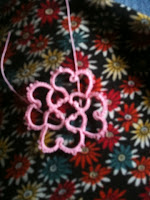 Diane made this Butterfly Effect motif from Tatting Lace with Your Life, in size 20 Lizbeth #616, Daffodil Med. The second motif is in Lizbeth #170, Pineapple Parfait. The third motif for the doily is in Lizbeth #138, Leafy Green. Before getting into canning beets she made another motif. Working steadily she completed 7 motifs for a doily that looks like a bouquet of flowers and  measures 5 inches across. Her favourite Spinning Wheel glass mat from Tatting with Visual Patterns by Mary Konior is in size 20 Lizbeth, Leafy Green, one of my favourite colours. And here it is all finished. She was sure she had enough, but with a short bit to finish she ran out of Helm's Deep HDT. She's going to keep the shuttles attached for now and check her stash for more thread. 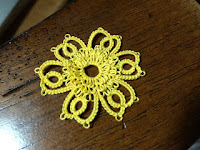 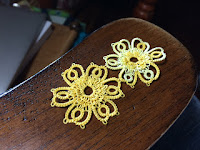 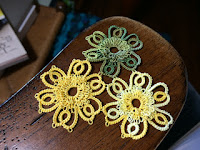 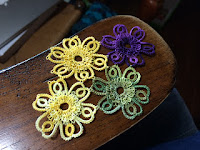 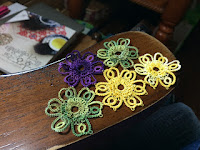 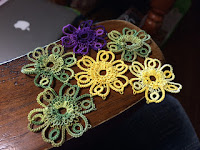 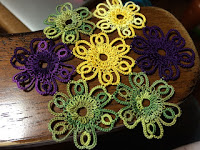 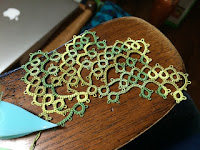 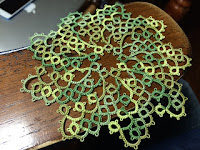 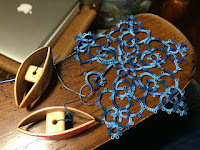 Eliz tatted these Butterflies with Ikuta Overlapping Picots by Ninetta Caruso. The one on the left is Lizbeth colour #112 and the one on the right is Flora colour #228, both size 20.

Fox had to cut off part of a row and didn't have enough to finish off the Rectangle doily, so she's decided to omit the final row and it's sitting proudly under her Mom's soapstone carving. She's started this doily for Maeve but she's a bit disappointed in the colours, which are Maeve's favourites. 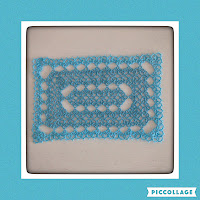 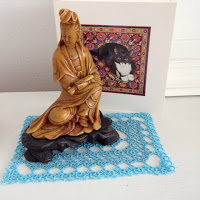 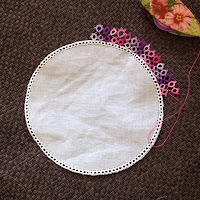 Muskaan tatted Floral Coaster Six Petals (split ring variation) by Robin Perfetti in Anchor Mercer size 20, 0289 yellow and 1215 shaded green. Then she folded various sections of the yellow flowers and show a lot of different variations can be achieved. She tatted The Fifteenth Day of December Snowflake by Lene Björn from 24 Snowflakes in Tatting in Anchor Mercer size 40 thread in white and explains some of her trials in making the snowflake. 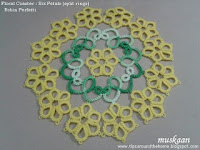 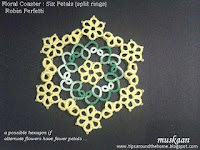 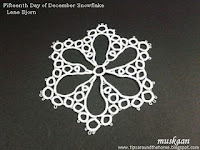 Phyllis says this Spinning Wheel Glass Mat by Mary Konior was tatted in  DMC Traditions thread and while she didn't like the feel of the thread, she did like the colour. It will be heading to the Palmetto Tatters Guild for their scholarship fundraiser. 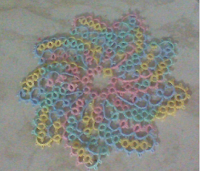 HisKid is happy with how Renulek's 2016 Spring Doily is working. The top of her Flourish with the Cross is done, now she just has to complete the bottom. The cross is tatted in size 20 Lizbeth Caribbean and Lilac Dk. She started row 14 on the doily. 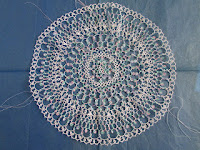 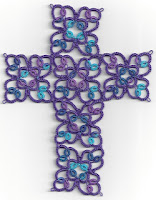 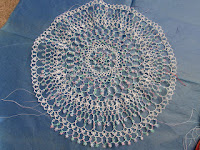 Wanda started a lanyard with beads in DMC Cebelia Lavender, but she didn't like how it was coming out, so now it's a hatband. She started again, but was in such a hurry she didn't bother to string any beads on. Here they are together all ready for the Palmetto Tat Days.