Jane continues to work through the Tatted Artistry of Teiko Fujito and although Motif 33 is done in one colour in the book, she decided to use colour to emphasize the flowers, using Milford size 20 thread for the design. She replaced the normal chains with lock chains in Motif 34, but the chains were too long. She snipped the chains out securing the ends and re-did it with the colours in reverse and smaller chains. This motif makes her think of tulips and has an odd construction where the outer round isn't joined all the way around and she didn't think she'd need to shorted in inner chains. Fortunately she realized there was a problem before she got too far. 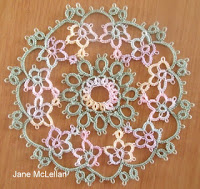 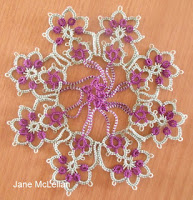 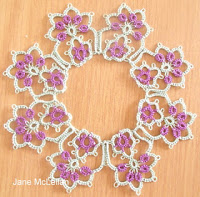 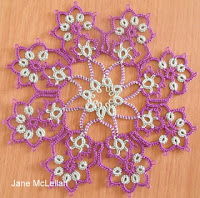 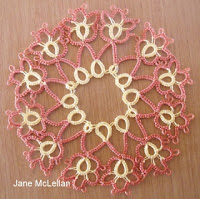 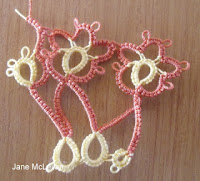 Sharon is tatting Renulek's 2014 Spring doily in size 40 Anchor Mercer thread with plans to enter it in the county fair, but after tatting a while in the car she realized she was joining the front side chains to the back side of the doily and had to cut off the offending bit. 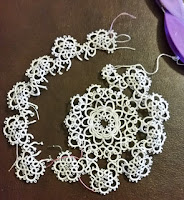 Nikki has decided to start the same doily again, this time using colour and she already has the first rounds done. Looking good! 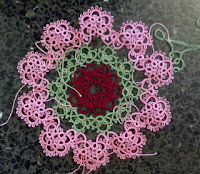 Melanie notes that this is the first time she's tatted a pattern starting at the edge and going towards the center with each round and she was nervous that the edges might begin to curl or ruffle, but they didn't.

Diane started her next Spinning Wheel Glass Mat in HDT size 20 Helm's Deep from LadyShuttleMaker. She has started test tatting Robin Perfetti's Victorian Coaster and is looking forward to more of Robin's designs. 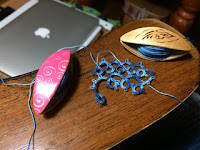 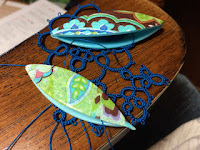 Marie loves the nice chains the lucet produces and mixed up this bracelet with some tatting. She wanted to try a Morfo Butterfly in Anchors, pearl cotton #12 but it doesn't have the same crisp feel of 3 strands of sewing thread. 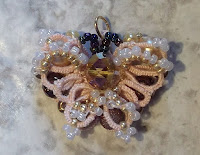 Wanda tatted a little bit of red, white and blue for flag day.