Mistene finished round 1 of the Heart Doily using her new Summer Trail HDT from Yarnplayer, although she had to cut/fix a few times because she wasn't paying close enough attention to the pattern. She zoomed through round 2 which was a nice break from the first round. 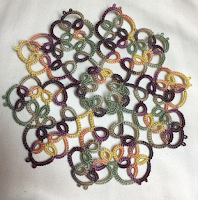 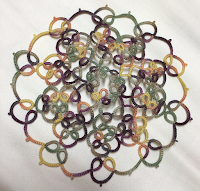 Jane found there's a lot of tatting for the area covered in Motif 39, which is 13 cm across and she likes the effect of the variegated green. She had red thread left on the shuttle from the last motif, so she used it for this one, which continues with the chain rosette theme. This motif was a contorted mess after the second round, but the outer round sorted it out and although the book says the flowers are blue she decided on a rainbow of colours since each one was done separately. 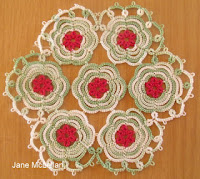 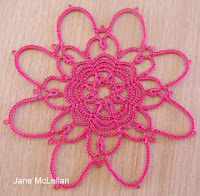 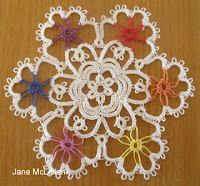 Marthanne has been having some trials with the butterfly doily. When last we saw it she realized she had a mistake to fix and since then she has cut off row 5 and 6 re-tatted them and added rows 7 and 8. For a break she tatted this yellow cat, but she's misplaced the pattern so she can't tell us the source.

Melanie came up with this variation from Renee Campbell’s pattern Rainbow Bright Earrings for which she used size 80 thread and no beads. She finger tatted the Long Picot Earrings designed by Nina Libin in mint colour thread and used a single shuttle split ring for the second ring. 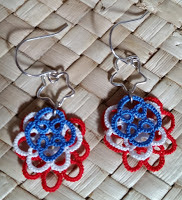 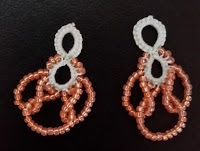 Diane has some new shuttles to use while working on her Spinning Wheel Glass Mat. 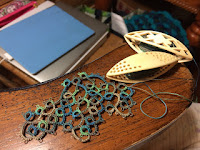 Eliz  managed to add a round to Renulek's Spring doily, but she's still way behind. 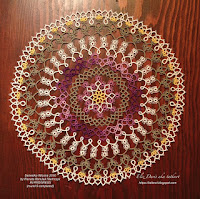 Fox is loving the Rectangle doily which is fiddly, but she likes the shape and she's already on round 3. 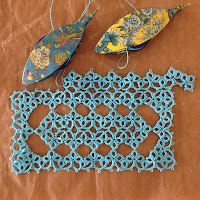 Margaret has the tenth Day of December snowflake done in pure white, Lizbeth thread, hoping that in December she will have all 24 snowflakes done. 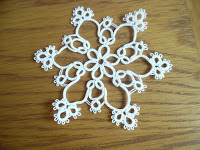 Marie got a little sidetracked, but she finally finished her doily which measures 10 inches across. She tatted Maria, another cross from Lene's book. 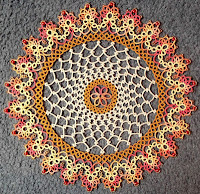 Martha has a new book of tatted toys coming out soon which will include her unicorn. The unicorn morphed into Pegasus. I can see lots of people adding this book to their wish list. 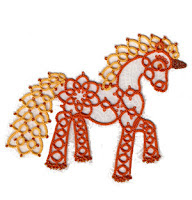 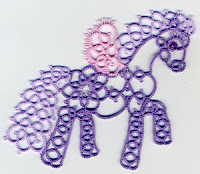 Stephanie has been tatting, but as they're test tats she can only share a blurry picture just now. This is Martha's toy dump truck which will be in her new book. The rubber duckie is also in the new book. This is the bunny from Jane Eborall's TIAS 2016 that started back in January tatted in Lizbeth threads, size 20, except for the carrot greens which are an 'unknown' thread. She has been experimenting with colour and assorted threads tatting a Jan Stawasz doily. This first one is done in Omega thread #50 and she likes the variegated colour which reminds her of colouring with crayons. The next one is done in Perfect Quilter approximately equal in size to DMC 80 and the yellow ombre is such a nice, warm, and happy colour. She used a ball of bright yellow for this one and she's not sure of the size or the manufacturer, but it came out slightly smaller than the one done in Perfect Quilter. She used two shades of pink - those tiny, balls with no size on the label for this one. This Mary Konior doily, called, Primrose Path, is tatted in a Sulky Cotton Blendables #12-weight that has a nice lustre to it, again equivalent to size 80. 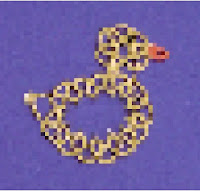 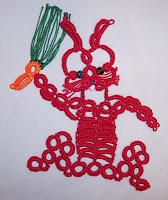 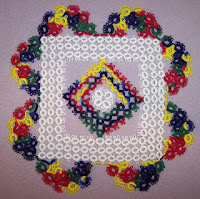 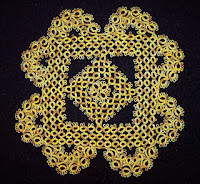 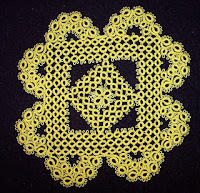 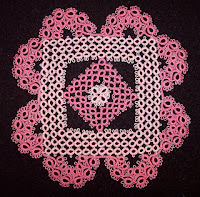 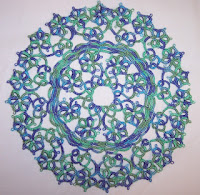 Sue started round 11 of the Spring doily, which was a bit of a surprise because she thought she had just finished 11, but it was only 10. At this size it's hard to keep track. 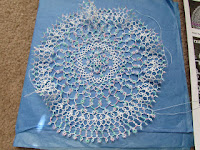 Wanda hosted the Tuesday Tatters and got out her vintage dishes, displayed on her lovely tatting for the visit. Becky brought this beautiful infant's dress to share with a simple ring and chain edging at the neck and arms. There is a matching ring and chain insert with a ring and chain hem. Altogether it's a charming piece. 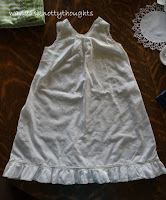