Sarah tatted motif 30 from the Japanese book, "Tatting Lace Nice Items"#3440' by Sumi Fujishige although she changed the centre rings to SCMRs and threw off the hearts instead. 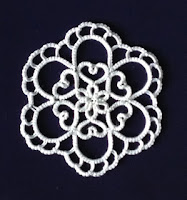 Elsa tatted Medallion # 50 from Nellie Ellison's  Corticelli Lessons in Tatting in Lizbeth size 40 and reproduced the pattern in visual format to save others the headache of working with an older pattern. 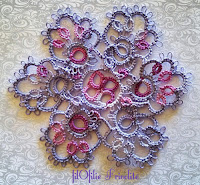 Melanie wasn't having great success with design ideas but she did create a stitch gauge in size 20 thread to help in future designs. 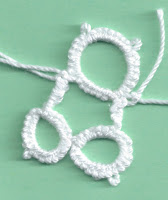 Sue was set a design challenge for which this was her first try plain. Then she did a beaded button version with more pizazz. 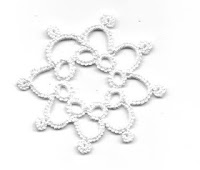 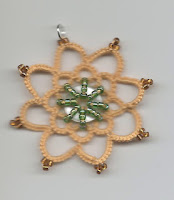 Grace has posted a series of left handed pictures of a cloverleaf showing how to avoid gaposis, that tiny little extra space or gap at the base of the rings. 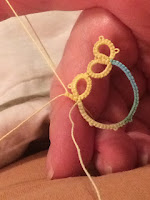 Claire made this card for her sweetheart, mixing calligraphy and the Kiss Curl Heart by Nicola Bowersox tatted in Lizbeth size 20, colour Falling Leaves #100. 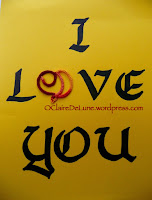 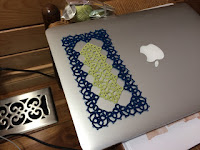 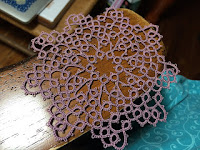 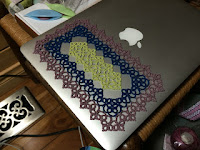 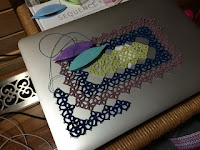 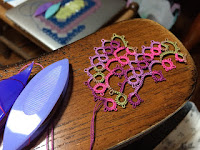 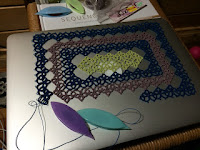 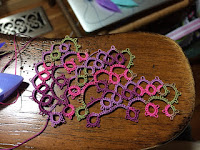 Fox was sure that her tatting was achieving the desired crispness due to the thread she was using, but she realized with this Design by Pascale Provost that it's due in fact to her improved tension. She found the last of her Karey Solomon #40 HDT, opened up the Mary Komior book and tatted this. 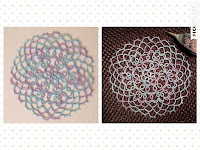 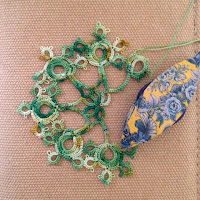 Margaret tatted these earring using a Pinterest pattern, no 18 Modello Frozen, from http://www.verbenacreazioni.it/. She thought it would look lovely as a pendant but the earring size was too small so she doubled all the stitch counts adding three beads on rings B and D the chains are long and the rings are very big and she finished it with a very small ring with a large bead in the centre. 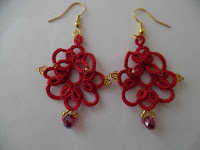 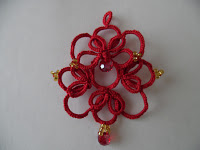 Marie made a bell, but with this thread it looks more like a tree. 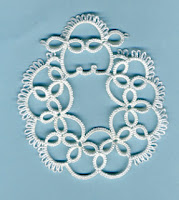 Muskaan found a butterfly inside a snowflake and shares the pattern for not only a flat butterfly, but also a 3D version with various options for antennae. Butterflies and flowers are just natural companions. 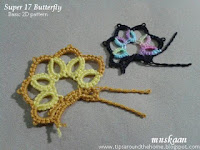 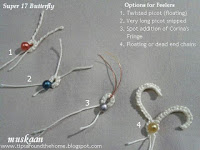 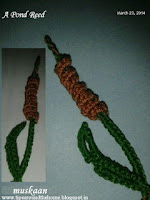 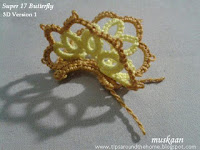 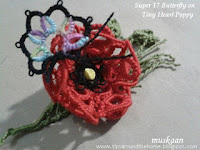 Phyllis made these snowflakes from 24 Snowflakes in Tatting for the tat-along over in Craftree Snowflake no. 2 is made with size 20 Lizbeth, Blue Ice.  Snowflake no. 5 is Artiste embroidery floss from Hobby Lobby. 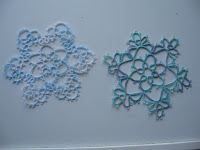 HisKid tatted Elaine P. Gan's Justification Cross in size 40 Lizbeth Tropical Punch. She has an update on the Celtic Cross which she thinks at this point would make a lovely doily. It's done tatted in size 40 Lizbeth Sky Blue Med and about 7 inches tall by about 5 1/2 wide and she may attach it to a shirt. She has another round done on this doily which Muskaan is calling her Hide and Seek doily as she's having to work on it in secret. 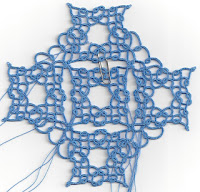 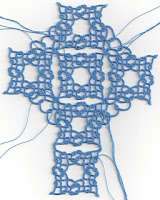 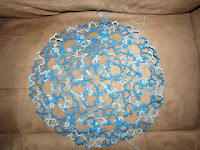 Wanda's Tat and Chat group gathered again and these were some of the tatting finds they brought; a small doily, a silver shuttle and a French ivory (faux ivory) shuttle with tatting still attached. 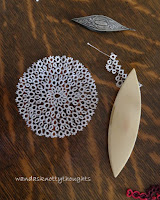 I absolutely love this blog! It has inspired me to start my own blog. I am very new to both tatting and blogging but I am hoping to figure both out. I would love to join your challenge, my blog and pictures can be found at http://heartsintatters.blogspot.com/ I am very much looking forward to joining all the wonderful tatters! Thanks so much for all your hard work.