Sarah tatted my Dec 2015 snowflake altering the stitch count slightly to give more rounded outer chains. When she made it using the original stitch counts it looked like this with the radial bars are even more striking, but not quite the same look. 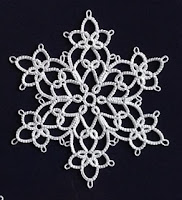 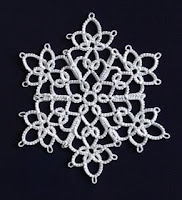 Sue finished Day 5 of Jane's TIAS which she thought was a bubble car, but the new addition seemed to squash that idea until it occurred to her that it might be a step. 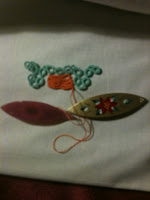 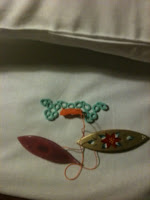 Lelia has Day 4 of TIAS done and she's still working it twice, one in pink and one in green. It still reminds her of a creepy crawly thing and she's wondering what kind of a bug it will turn into. 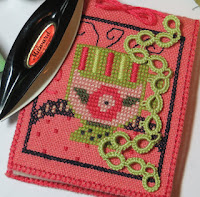 Linda shares a doily done by a relative and shows how the old method of cut and tie results in little tufts of fuzzy thread as the ends untwist and fray. (My personal quirk is that I always tie and then hide the ends weaving them in and out through the caps of the stitches before cutting the ends off short close to the work so they can't come loose and if they fray it's hidden under the stitches where it can't fuzz.) 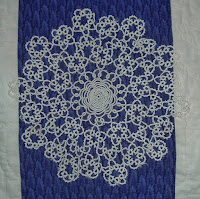 Diane found this ball of Lizbeth Springtime, #115 hiding in her sewing room and this happy little pattern from The Craft of Tatting by Bessie M. Attenborough is destined to be a hanky edging. It's amazing how quickly this project is going after working on the huge doily. In case you're wondering, she did start another Spinning wheel glass mat, in colour to match the hanky. The Tollway Tatters had another get together and Diane was able to start another glass mat, this one in size 20 Lizbeth, Falling Leaves, #100. Marilee brought along samples for upcoming classes she'll be teaching. Sue Anna was helping test tat one of Marilee's patterns. Barbara was busy tatting a snowflake. Diane finished her Springtime Spinning Wheel glass mat and had enough thread left on one shuttle to tat enough Leaf Braid from Tatting with Visual Patterns by Mary Konior to make a bookmark. 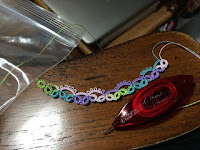 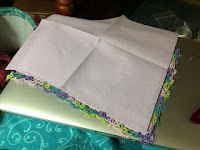 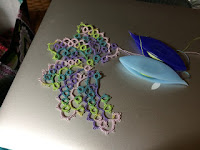 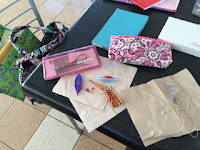 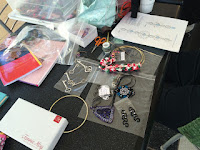 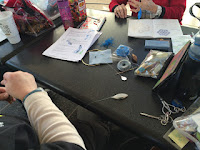 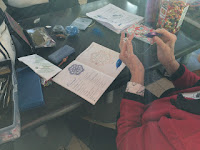 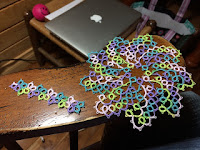 Fox has run out of the turquoise thread and the variegated doesn't look far behind and she's anxiously awaiting more so that she can get this piece finished. 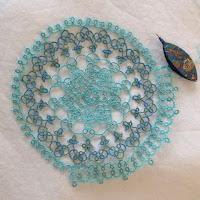 Lilas liked how the cabochon motifs looked when completed. Then she assembled them together and she wasn't happy with the results so she thinks she''l have to cut them apart and start again. Since the centre of the collar wasn't working she switched to working on the other side while she considers her options.

Margaret has decided to tat the heart doily pattern by Land of Laces  using Lizbeth Cranberry Bush thread no 20 and hopes to have the middle done by Monday. 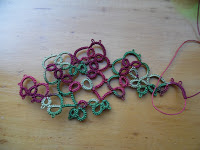 Marie is working through the motifs on Pinterest and these two are done in blue. This was a quicky, little flake, using two strands of rayon and one strand of metallic gold. 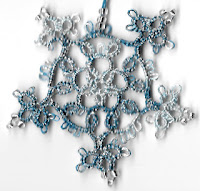 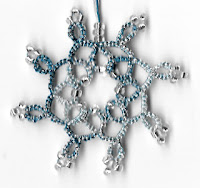 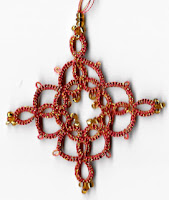 This is my 3rd time to do a second round of the challenge. Here's hoping it's the charm. http://laurette-tats.blogspot.com