Melanie decided she needed more help with her designing process, namely in converting the lace design to paper, so she started with tatting Wild Rose a vintage pattern by Nellie Hall Youngburg then writing it up in modern notation and creating a diagram. She didn't like the original, so she did it again adding some embellishments of beads to fill the gaps and Josephine Knots instead of the smaller rings. 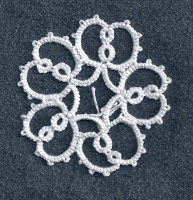 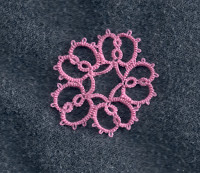 Sue shows us the Motmot bird she test tatted for Jane Eborall. She has her next instalment on TIAS done and still thinks it's a triffid. 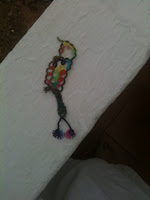 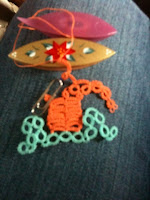 Diane has been carrying my Leafy Greens Spinning Wheel glass mat around and is amazed at how much she can get done in spare minutes of time, which reminds me of the poem "Tatting in my pocket" by Noelene Lafferty. She wanted to tat something from this Japanese book and she was sure that she had the centre for design 7 right but when she got to the next round there was no way to intertwine the chains with the shuttles she was using. 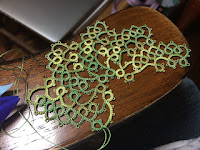 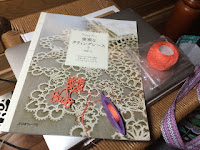 Laurette has joined for a third round of the 25 Motif Challenge and she is currently working on a pair of Cobweb Doilies from Tatting Doilies and Edgings by Rita Weiss. She is using thread colours inspired by a paint card which had an ecru colour with a hint of green but the plain ecru worked just fine.

Lilas discarded the row that wasn't working and went with something different, which seems to be working. She started test tatting the adjoining foliage which is allowing her to connect to the split rings, but she has to see how it's all going to fit together. 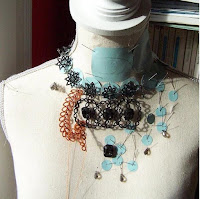 Marie has tatted up a storm of snowflakes using sewing thread. One of the snowflakes looked like it would fit around glass so she kept it. 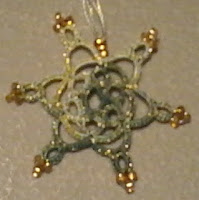 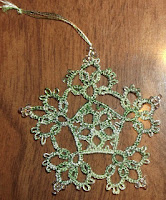 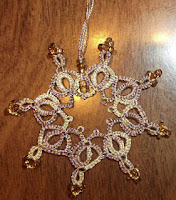 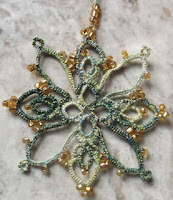 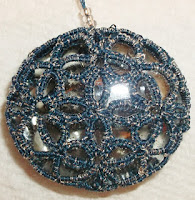 HisKid tatted Elaine P. Gan's Chains of Hope bracelet using up the size 40 Lizbeth Green Coral Sea from the suncatcher so it's  a little small and may need an extended chain, but it covers the front of the wrist well. She did some playing around and experimenting with her tatting and a finding which didn't come out as she had drawn it, but she likes the effect. She couldn't sleep, so she tatted this piece which is quite small, only about an inch long, from a trial of a diagram Elaine P. Gan showed the test tatters. The next piece is a cross variation that's about 2.5 inches tall. 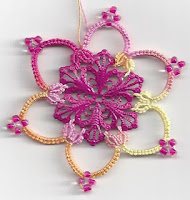 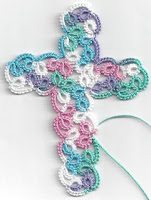 Wanda was working on Jane's TIAS and notices a thread where it shouldn't be so she's waiting to see if it's salvageable. She found her snowman that came out in the wash and amazingly the hat scarf and flower are still attached. A little blocking and he should be good as new. 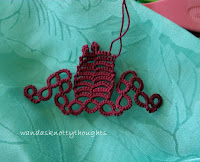 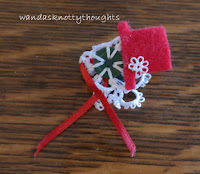 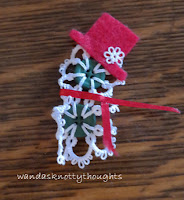