The Guidelines
1. Permission to copy. When a participant joins they are authorizing me to copy their pictures to be shown on the challenge blog.
2. The blogs are ALL checked whenever there is an update using the links list in the sidebar on the right, there is no need to advise me that you have added new content. If your new items haven't shown up, it's because I haven't had time to do an update yet.
3. I can't keep track of how many motifs each person does. You may post articles of tatting that you don't plan on including in your 25, or you may post a pair of earrings and count each earring as a separate motif. I don't read minds, so it's up to each participant to tell me when they have reached their goal of 25.
4. From past experience I know the challenge is addictive. If you finish and plan on doing it again let me know so that I continue to check your blog on a regular basis. Also let me know if once was enough so that I can move your blog to the list of past participants.
5. Whenever you get a chance don't just view the pictures here, take the time to click on the links to people's blogs and read all about what they are doing, instead of just getting the snippets of it here. People like it when you take the time to visit their blog and comment on their work. A lot of the fun of the challenge is that we get to know each other and encourage one another to try new things.
6. Tatting 25 motifs in a year typically means tatting 2 motifs per month. Tatters who do not post any tatting content for 5 or 6 months will be removed from the list of participants.
--------------- 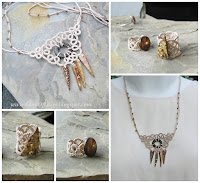 Melanie did several sketches, some test tatting that she lost track of and finally arrived with the snowman, but now that it's done she thinks it looks like a duck, maybe because the beads are too big. 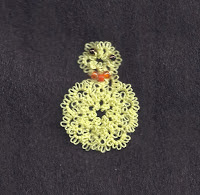 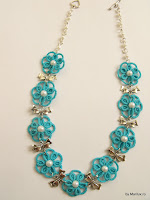 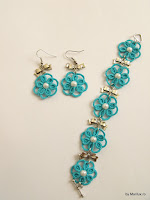 Julie tatted Jennifer Williams Cluny Flower Pattern with black and a colourful variegated thread for a very dramatic look. She shows a length of cluny leaves and notes that cluny leave and split rings can be interchanged in designs. She has included a video link to show the process on her blog. 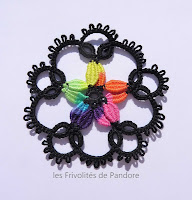 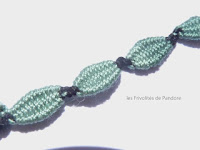 Sue has been working on her doily adding motifs around the outer rim, but she was distracted while watching TV and joined to the wrong point. Rather than cut she laboriously undid the work and is now happily half way around it. 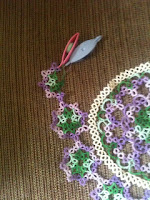 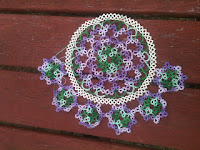 Linda finished the doily from Catherine Austin's book, A New Twist on Tatting working it in size 20 purple/white variegated. 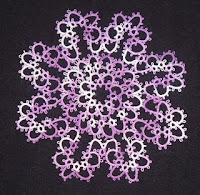 Diane finally took the plunge and restarted round 10 of her Jan Stawasz Masterpiece doily. 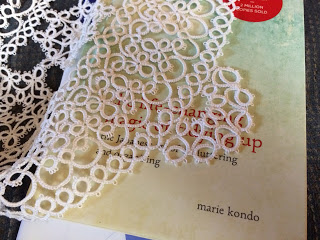 Fox finished fussing with the tatted cap and blocked it over a bowl perched on a glass. Once it was shaped it was still large enough for an adult's head so she gave it a bath in very hot water and now it will fit a small child, but it's too large for and infant. She recommends that anyone wanting to make it use size 30 for a child or very small adult. Fox has reached down deep and found the necessary intestinal fortitude to struggle on with the Fikkert doily and achieve completion. To that end she is making the round of outer motifs. After these are secured by the third row of the motif, there are 24 smaller motifs to be tatted and attached by twisty chains. She's working through it! Way to go! 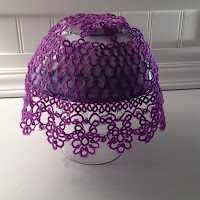 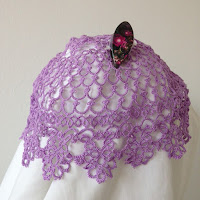 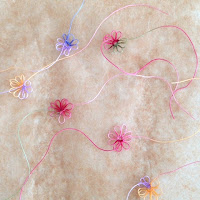 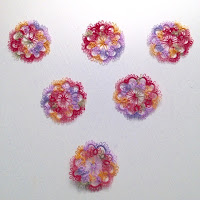 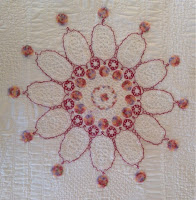 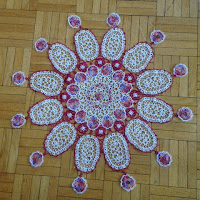 Jenn has round 6 of the Mystery TAL done and she's enjoying these easy rows that let her multitask.

Marie was using up some thread and designed this Pink Beady necklace. That was so much fun that she did another in white. The earring has been reworked with beads,pearls and tatting for a lovely pendant. 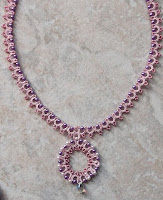 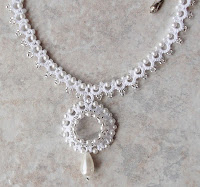 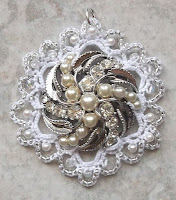 Martha has been busy with lost of other things, but now and then she pulls Wiosna out of her tatting bag and works on it. 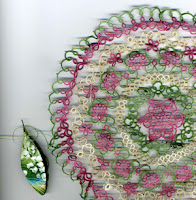 Muskaan shares her progress through the 2015 Beginner's Mystery Tat-A-Long from the beginning medallion through to the scalloped edging. The design by Tina Frauberger was re-worked by Robin Perfetti and then turned into a lovely bookmark. 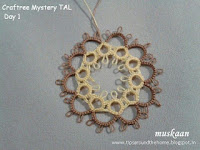 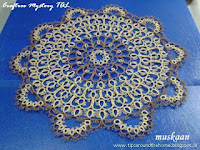 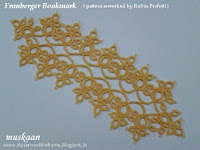 Phyllis has been working on smaller projects like the red earrings, called Simple ROR earrings by Corona Meyfeldt, while the medium blue are Tigereye earrings by Elizabeth C. Zipay. The green earrings are a pattern by Kerstin called Tutu Motif.  The blue Tardis Bookmark is by Anne Bruvold.  The pen insert is from Tat Days 2013 by Tonya Smith.  The key fob was the start of a lanyard for hubby using a pattern by Patti Duff. 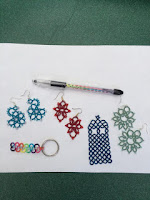 Wanda, besides decorating buttons, made a few bookmarks while on the cruise in Lizbeth #130 Island Breeze and #122 Caribbean in size 20.