Gwen got 1/2 of Round 4 on Renulek's Spring Doily done and should be able to complete the other half soon.

Julie made the Priscilla bookmark, a pattern from Tatting by the Bay, using Marilee Rockley's Crocus HDT. This little motif she tatted in size 40 Liazbeth 184, Rainbow Splash, designed by Tomoko Morimoto makes a perfect little gift. 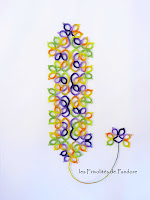 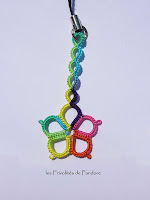 Sue has been busy in the garden which hasn't left much time for tatting, but she is making slow progress on her doily. 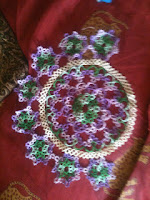 Nancy finished 2 yards of edging that will be use for an heirloom gown. 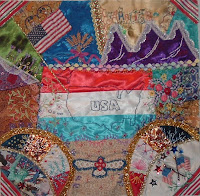 Claire tatted Waves earrings by Corina Meyfeldt in grey the first time, but this time she used Lizbeth size 20 thread, in Med Purple, #632 with a slightly larger, 6mm pearl and the larger pearl looks better on this size thread. 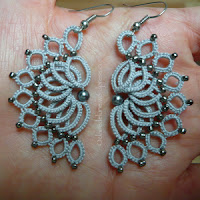 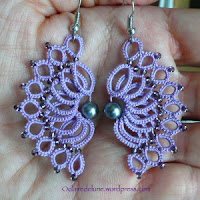 Diane thinks she's over the hump with rounds 10 and 11 of the Jan Stawasz doily and anticipates that working on it will be easier now. Another pattern repeat. And another. That's 5 repeats. She thought she'd time it to see how long a repeat takes and was surprised to find that it took two and a half hours. 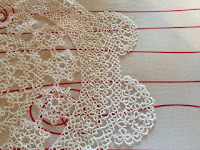 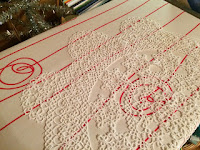 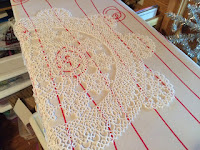 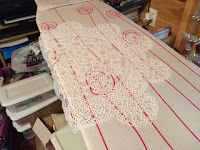 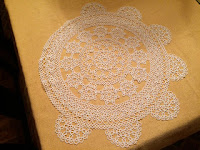 Fox is amazed that she had enough perseverance to get this far on Ben Fikkert's pattern which she would have been afraid to start a couple of years ago. Yay Fox! She was pleased to find the instructions for adding beads to split rings on Jane Eborall's web site. 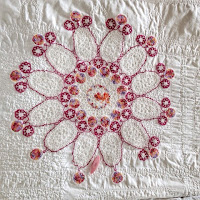 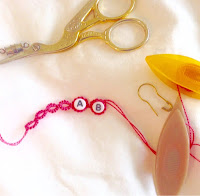 IsDihara was a teacher at her local yarn store where the students used snippets of tatting to decorate pin cushion jars. (There's a clever idea.) The June Tatting Social was all about patriotic tatting and they tatted stars and American flag bookmarks in different sizes. 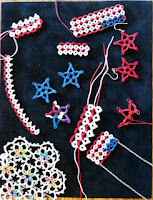 Jenn finished round 7 of the tatalong doily but weighing out how much thread she has left, she's thinking of changing to white for the next round.

Kristen finished this edging and started attaching it to the hanky, but it just didn't want to fit, leaving a gap at the corner. She cut it off and has it pinned around the edge hoping to stretch it out a little and try again later. 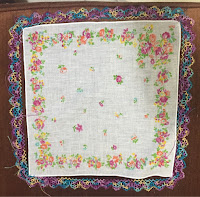 Marie created these earrings to go with the necklace she made. This pendant was made from a single clip earring. She tatted this bracelet from the Handy Hands newsletter using size 20 thread and 6 mm beads. This cameo was an old bolo slide which she removed the slide part and made it into a pendant. These were a pair of clip earrings that she added tatting around to make a lovely bridal set. This is an old design she worked on adding a drop bead to make more bridal earrings. 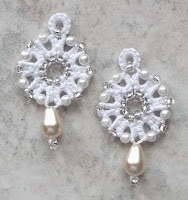 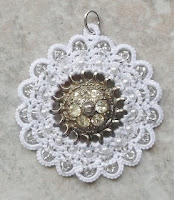 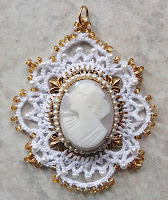 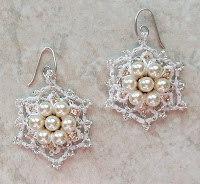 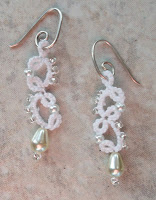 Wanda wanted to make a bracelet in red white and blue tatting around white buttons, but the white thread kept breaking so she finally tatted around the red and and blue designs in white thread but she's not sure how to turn it into a bracelet now. She got stuck in a hotel waiting for her flight back home which left her with lots of tatting time to work on bookmarks. The design is her lattice bookmark. She did it again without the tail, both are in Lizbeth Caribbean.