Mary Lena tried one of Renulek's doilies in very fine thread which measured 44 cm across and she liked the end results so much she's keeping it for herself.

Sue found that round 5 seemed to take forever to complete, but it's finally done. 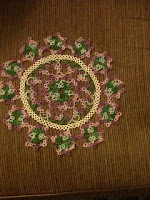 Nancy made a cross stitch scissor fob with an added accent of a tatted edging along the dress bottom. 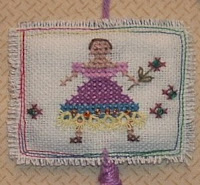 Claire has posted the pattern for the earrings she designed and notes that the English version isn't as detailed as the French version. 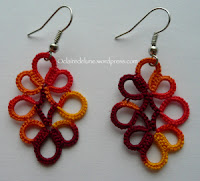 Diane has another round 10 and 11 repeat on the enormous Jan Stawasz doily done. See the little blue ties? That's where she found her mistakes way back on round 7. Here it is cut back to the first mistake and now she is moving forward, ever so slowly, stopping to double check and steaming after every three or four pattern repeats. Even the cut off piece looks amazing, let's hope she can cut off those pattern repeats and use them again, although that can be tricky. 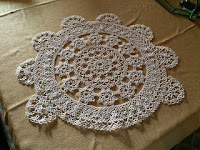 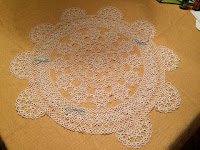 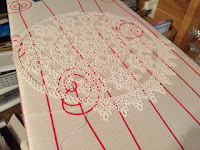 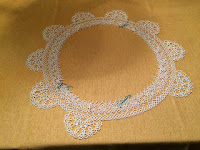 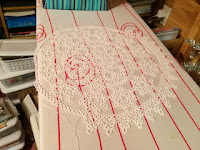 Fox picked up some alphabet beads hoping to use them to spell Abby, but there was only one B, so it's Abigail, which means she got more practice putting a bead in the middle of a ring. She thinks e Robin’s rework of a Tina Frauberger pattern would be great on a hankie if done in a #80. Having some lilac thread on the shuttles meant another bracelet. Her work on the Fikkert doily is nearing the end. The whole thing is looking amazing. 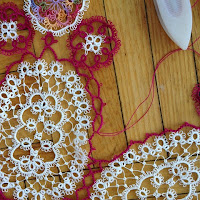 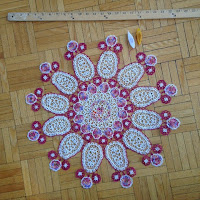 Margaret tatted the Celtic Bookmark by LaRae Mikulecky with section one in white and the second section in Summer Fun. After the two parts are assembled together, the third section, which she did in purple, is tatted around them. She has shown both the front and the back of the bookmark along with a close up photo. 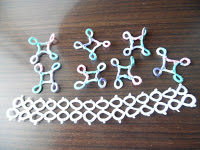 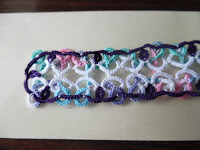 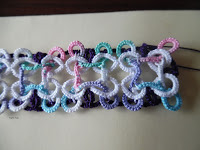 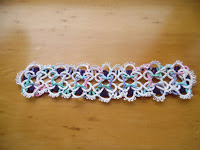 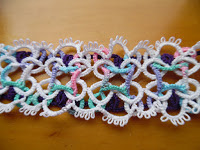 Marie loves working with old clip earrings and turning them into modern pendants. From Marilee's new book, Beaded Tatting Finery, she had to try this challenging, little pendant. She made a couple of interchangeable earrings for her Bridal Swirl collection. 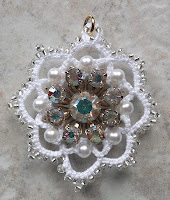 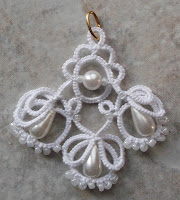 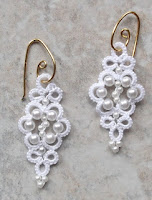 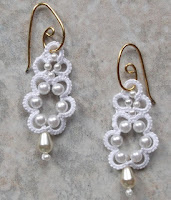 Martha has found the input from her test tatters has resulted in finding little typos as well as providing some interesting suggestions.

Muskaan tatted Jane McLellan’s bookmark and includes her information on working it in front side back side tatting while keeping the colourways even on variegated thread. Then she did a variation of Grace Tan's cross version of the pattern. She decided to add two tails to Robin's Frauberger bookmark which can be both whimsical and practical for marking several places in a book. 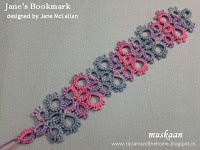 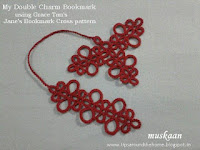 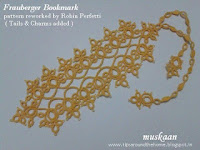 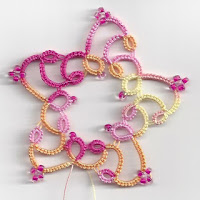 Hi Sharon, Have you forgotton me, I posted some tatting last week. Thanks for all your hard work you do for us all.

Sorry Margaret, I guess I missed it amongst the lovely pictures of your holiday. I've added it in now.