Administrative note
As we say goodbye to 2014 there has been some tidying up completed. The 25 Motif Challenge exists to encourage us to keep on tatting by keeping track of what we have accomplished and goading one another on to greater successes. By making 2 bits of tatting in a month you can easily tat 25 things in a year, but when several months go by with no tatting at all, it's harder to tat 25 things in a year and most people just give up. So when a blog doesn't show any new tatting in 5 or 6 months it gets dropped off the list of links in the side bar on the right and I stop checking it for tatting content. Sometimes a blog becomes inaccessible and these too will be dropped off the links list. Anyone who has been dropped off the list, but continues to tat and wants to get added back on, only has to email me at sharon at rsbriggs dot com to be added back on. However, some people ask to be added back on, tat one motif and then don't tat again for several months, so they will again be dropped off the links list. Anyone is welcome to join, but occasionally someone will ask to join but fail to give their blog location and that makes it impossible to find their work for display here. So, please, if you want to join, let me know where to find you.

Muskaan made Jessica Snowflake based on Kersti Anear's Jessica Bookmark in white Red Heart size 20 and shares the pattern, which coincidentally finishes her first 25 Motif Challenge. She jumped right back into another challenge with a new snowflake design she has named Neemiss. She discovered that it was easy to design in needle tatting because mistakes could just be unravelled, instead of having to cut and discard, so the name comes from NEEdle tatting MIStake. She used Anchor Mercer Size 20 White and variegated Navy Blue/White and shows all 3 rounds of the snowflake, although it looks pretty in 1, 2 or all 3 rounds. 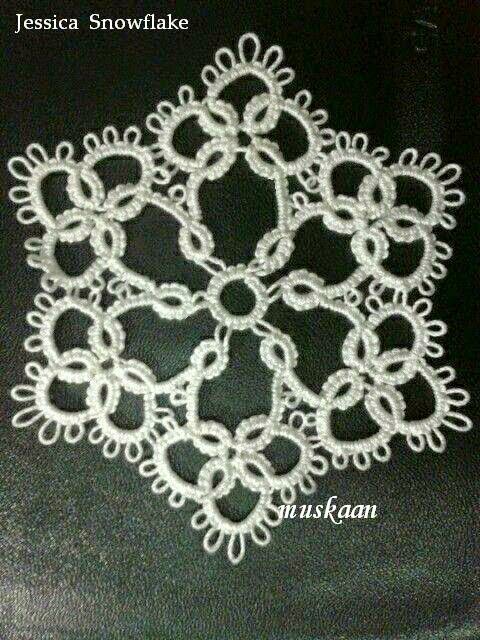 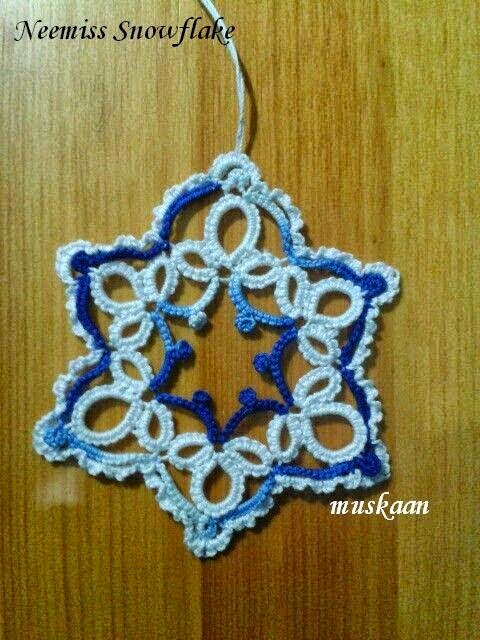 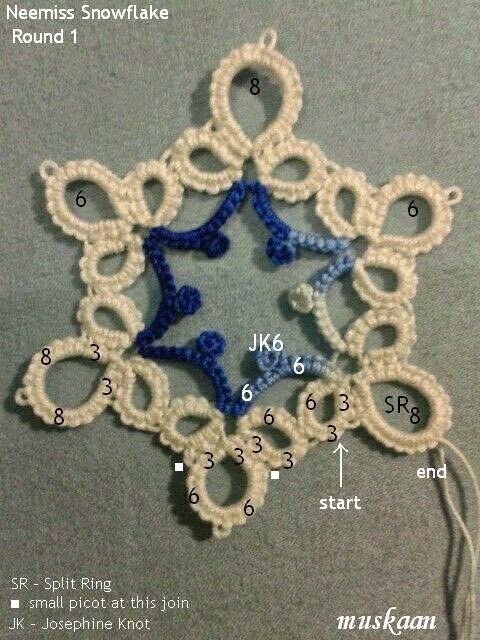 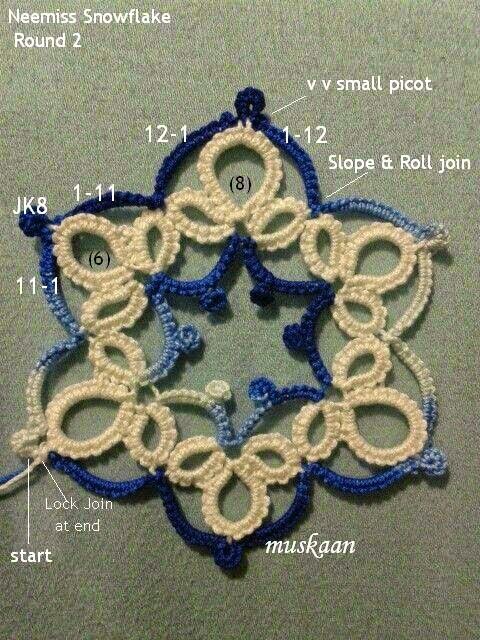 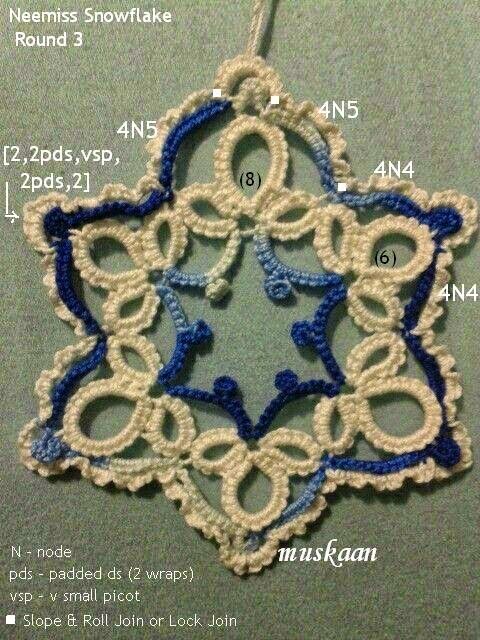 Erisnyx tatted Frivole's Flowering Quatrain in Lizbeth size 20, #684 for a birthday gift. She used letter patterns from The Tatter's Paradise in shades of blue, the favourite colour of her cousin to make this birthday present. She made a few leaves using Frivole's La Feuille Frivole pattern in Lizbeth size 20, #100, to put on the front of letters that she was sending out.  Robin Perfetti's First Snowfall pattern was done in Lizbeth size 80, #601. She tatted part of one motif of Jane Eborall's Diamond Patchwork pattern in a Christmas red and green as a white elephant gift for a Christmas party she was attending. 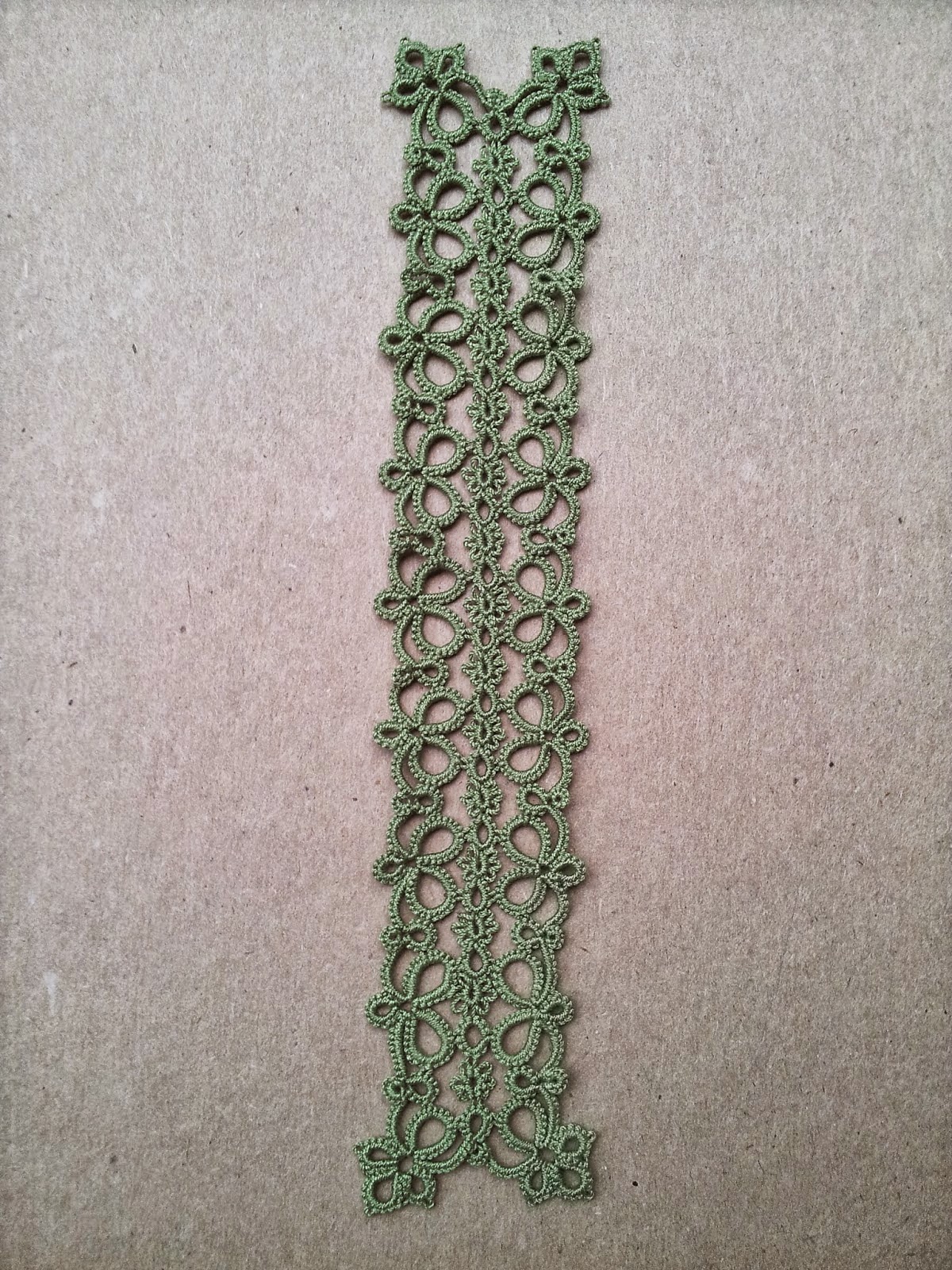 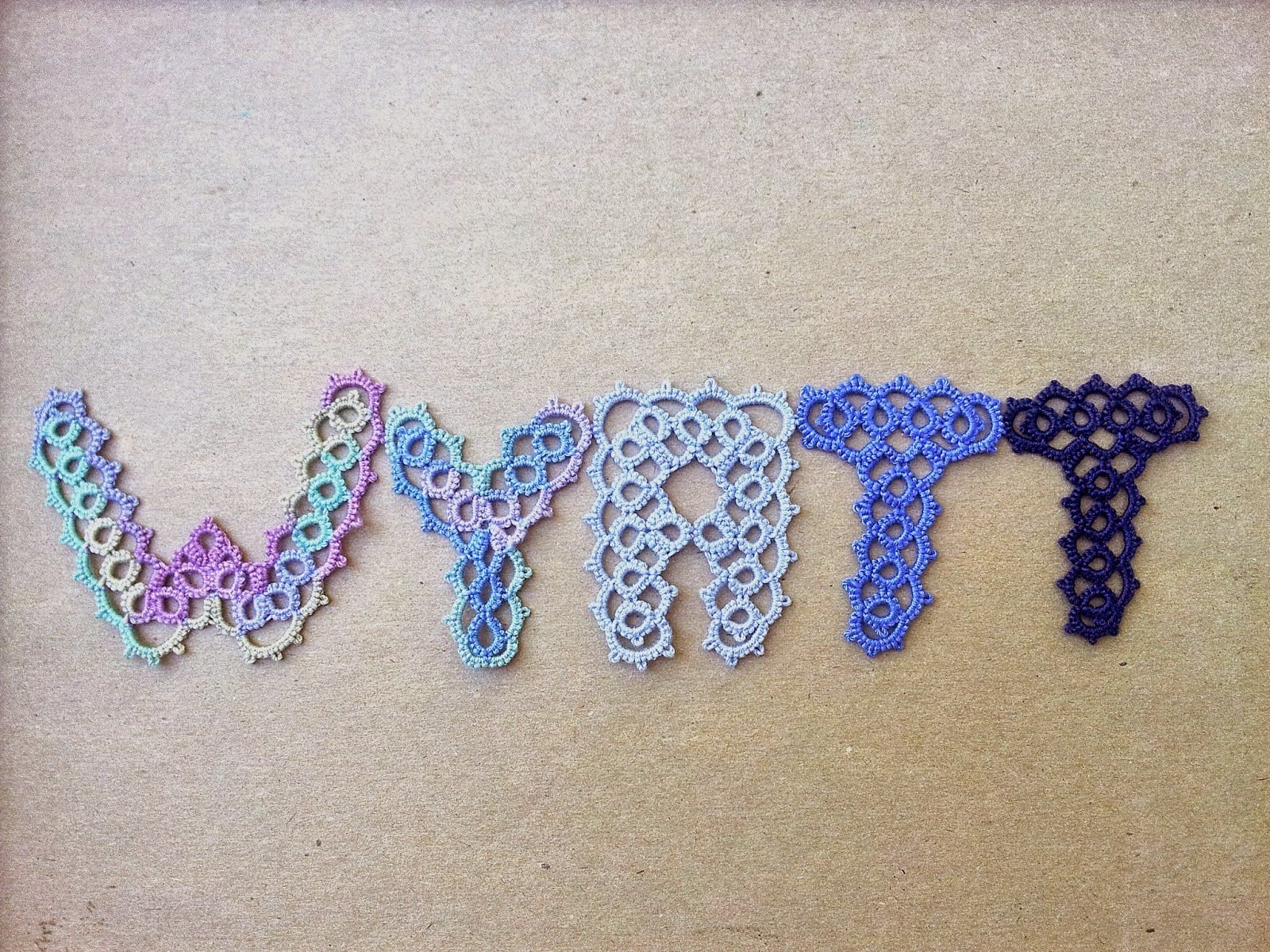 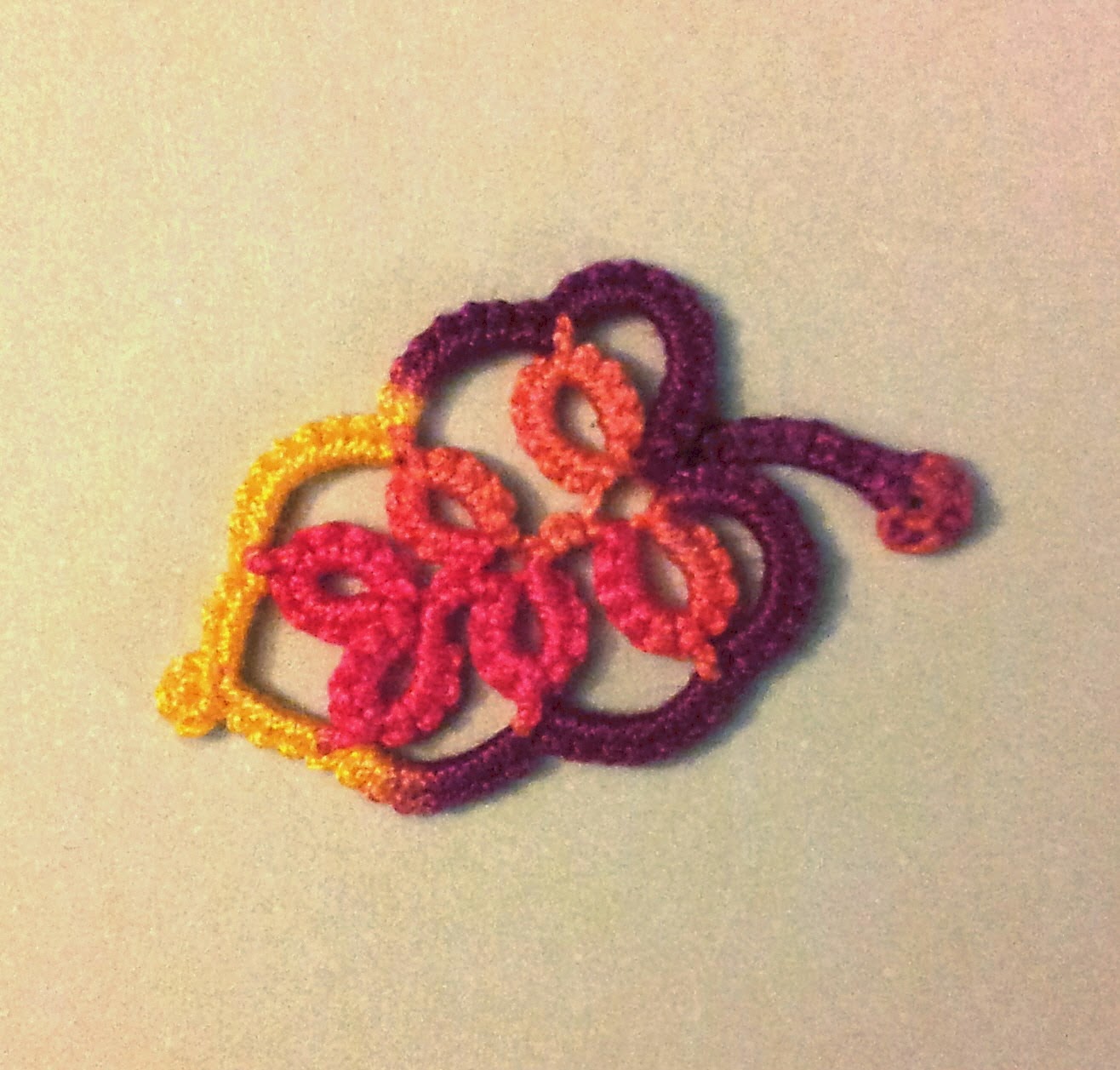 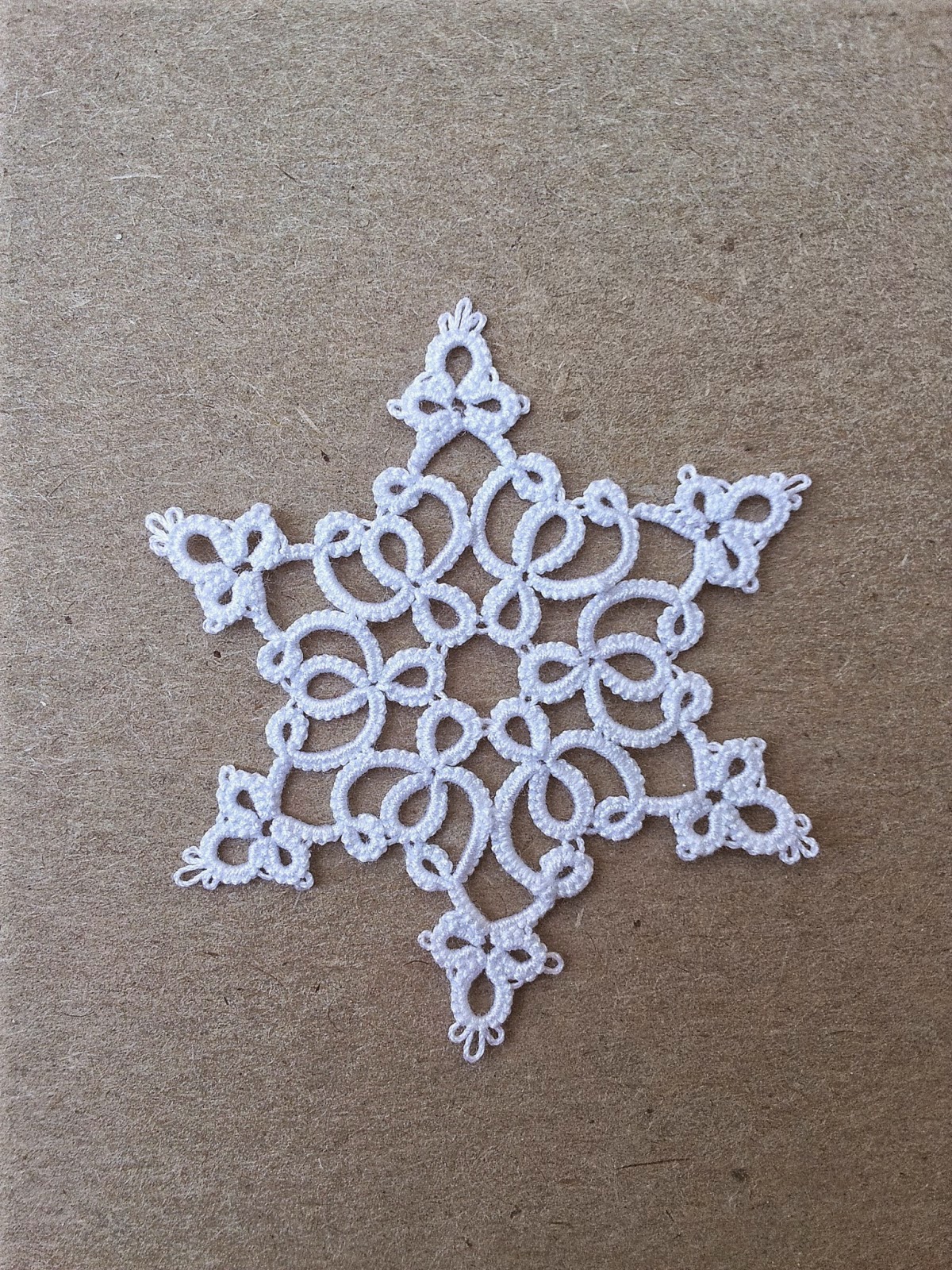 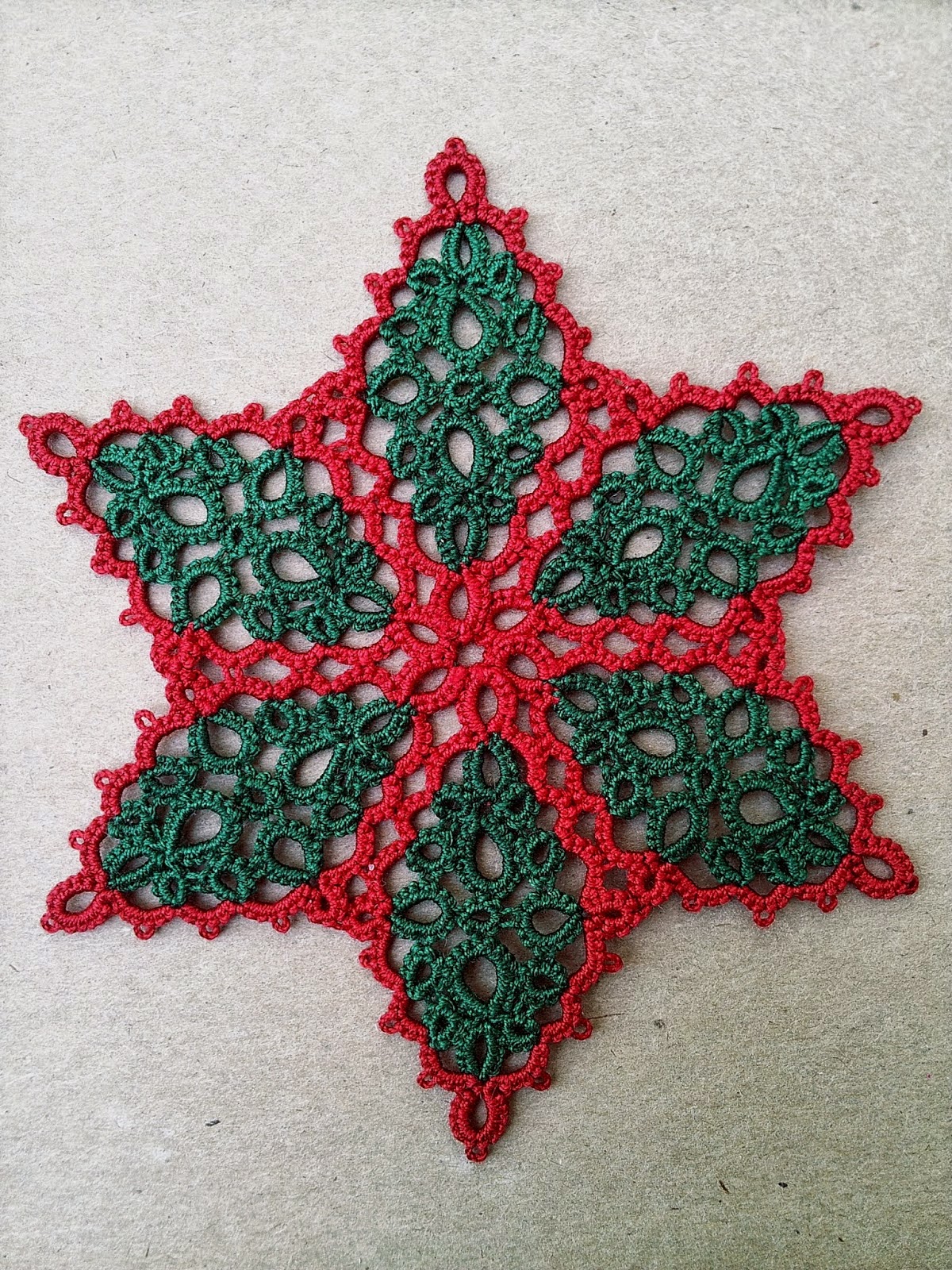 Claire tatted the Kiss Curl Heart by Nicola Bowersox and this charming design makes 25 motifs completed. Once was not enough so Claire has decided to take the challenge again. This snowflake pattern comes from a Polish web site and is the first motif for her next challenge. 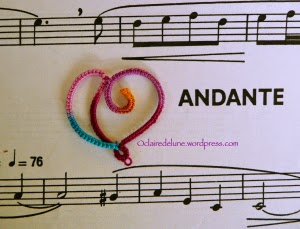 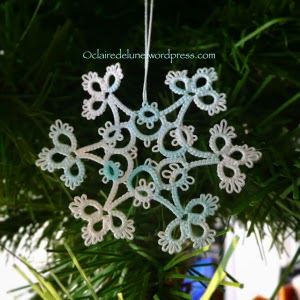 Grace is making progress on the Jan Stawasz doily from Robotki magazine. This is one of those designs that is worked in pieces with a centre section, a row of individual motifs and a row of tatting to join them together, followed by more rows of tatting. It's also one of those designs where you work for hours and then ask "Are we having fun yet?" As tedious as it might be to tat, it is a glorious design.

Fox tatted another Jan Stawasz pattern, this time in white, #60 DMC, which is what her daughter ordered. 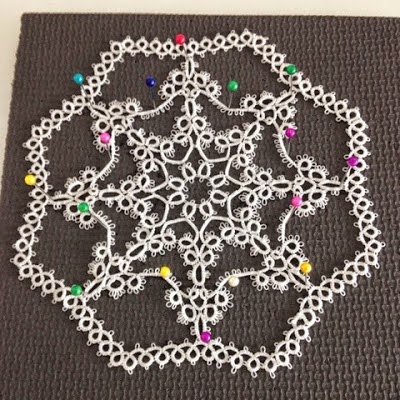 IsDihara tatted the Christmas berry wreath by LaRae Mikulecky and the pattern is still available through the Way Back machine. 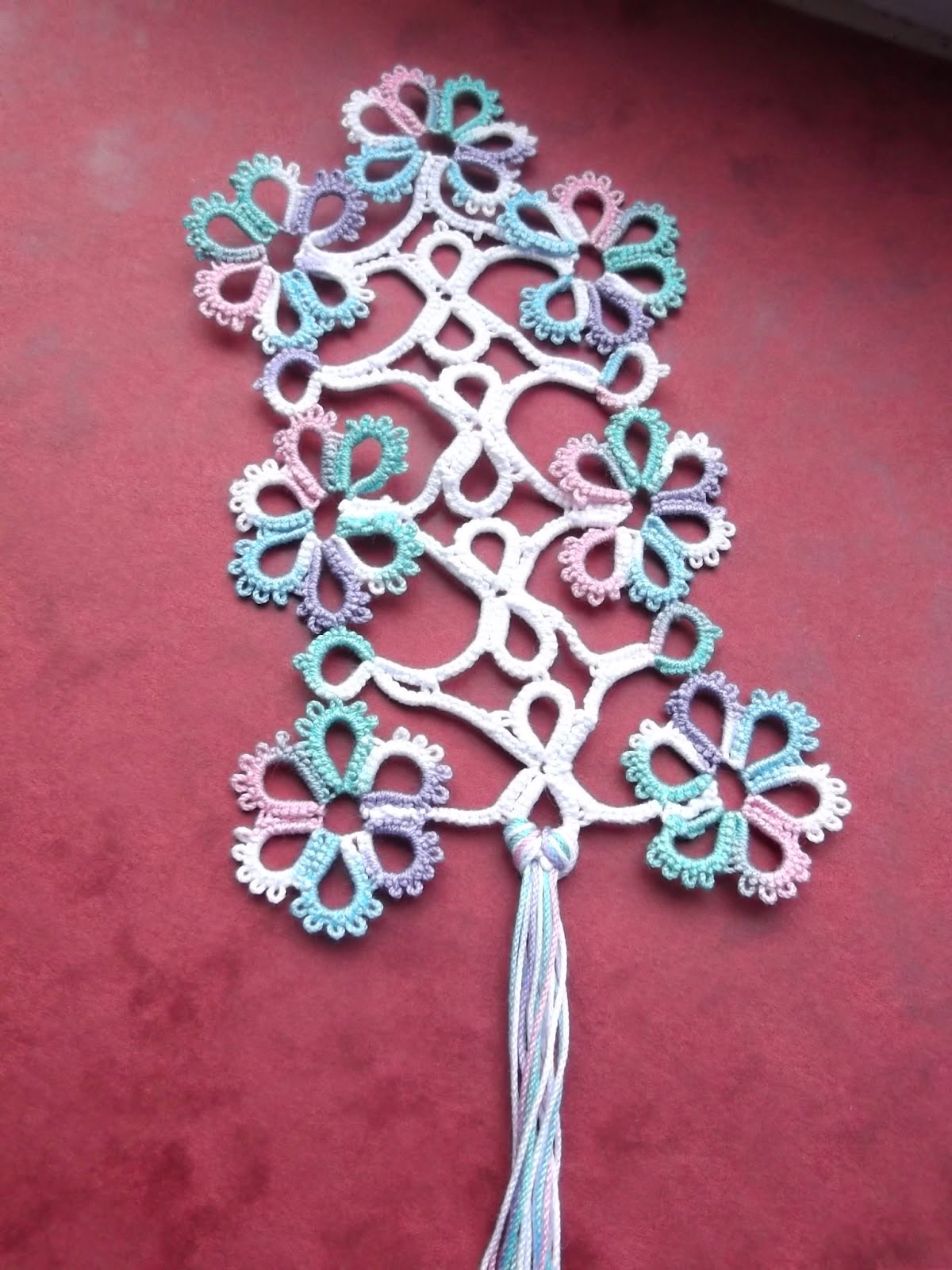 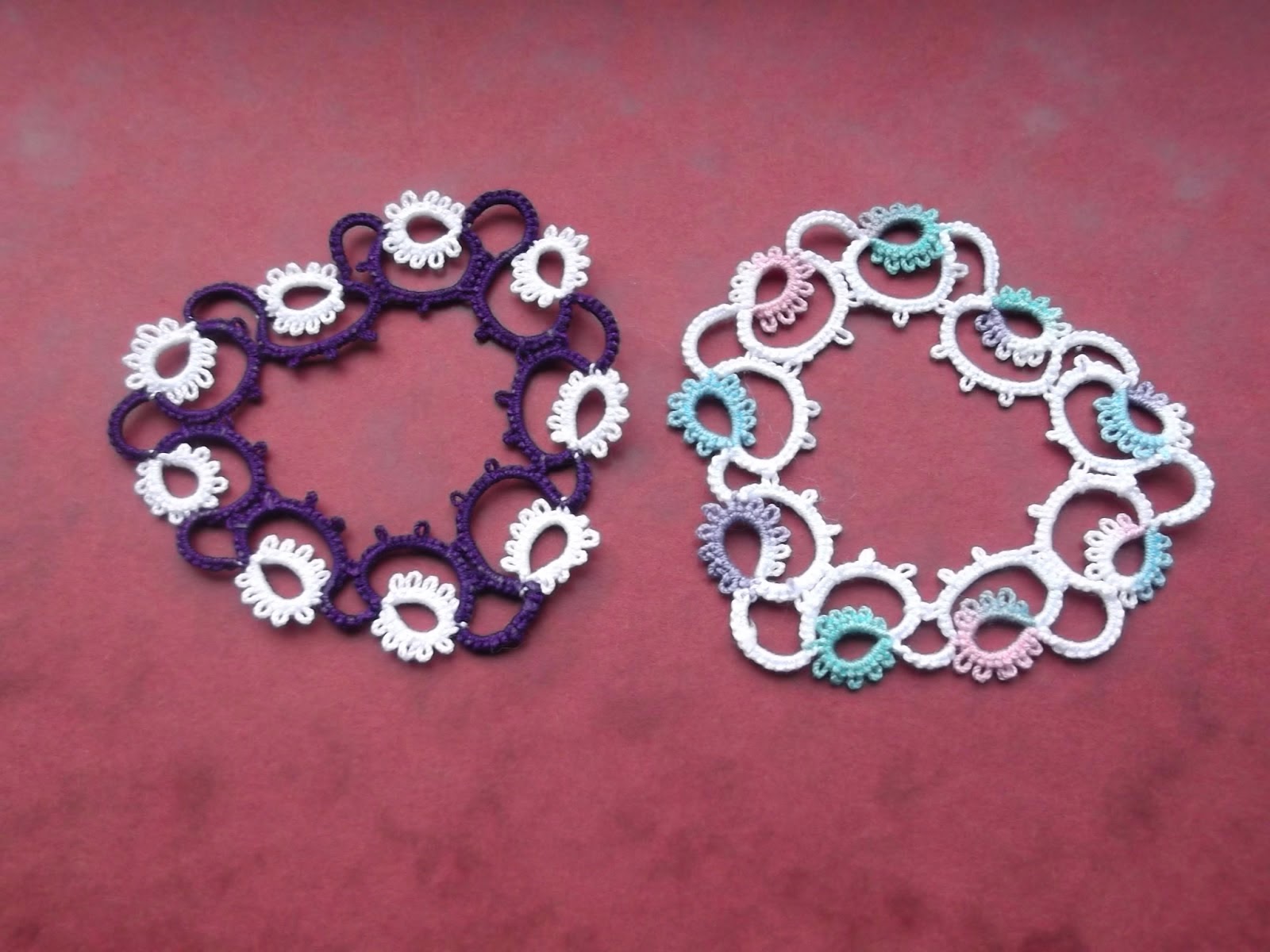 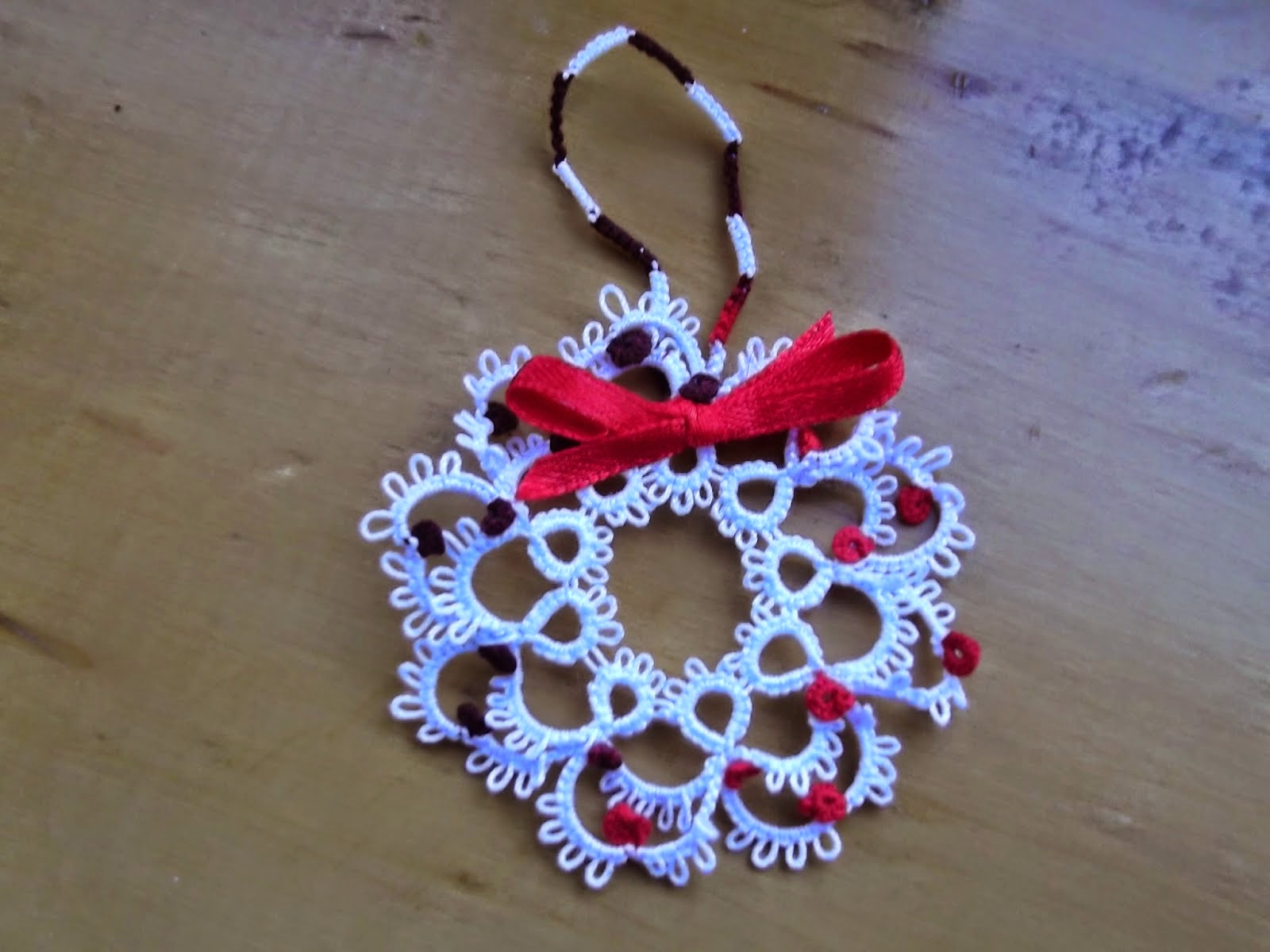 Marie found Jane's hummingbirds so entertaining she had to make a bunch of them. The windmill is another pattern by Jane Eborall that Marie made for her aunt. This is one of her Christmas ball designs that she wrote for needle tatting.

Phyllis tatted the unfolding Heart by Marilee Rockley, adding silver beads  for a little bling, which was given to her daughter.  Ars Colaris "My Wonderful Tree" is in the process of being stiffened.  The recipient will have to attached the pieces into a tree.  The last are shuttles her wonderful husband made for her out of exotic woods he found. 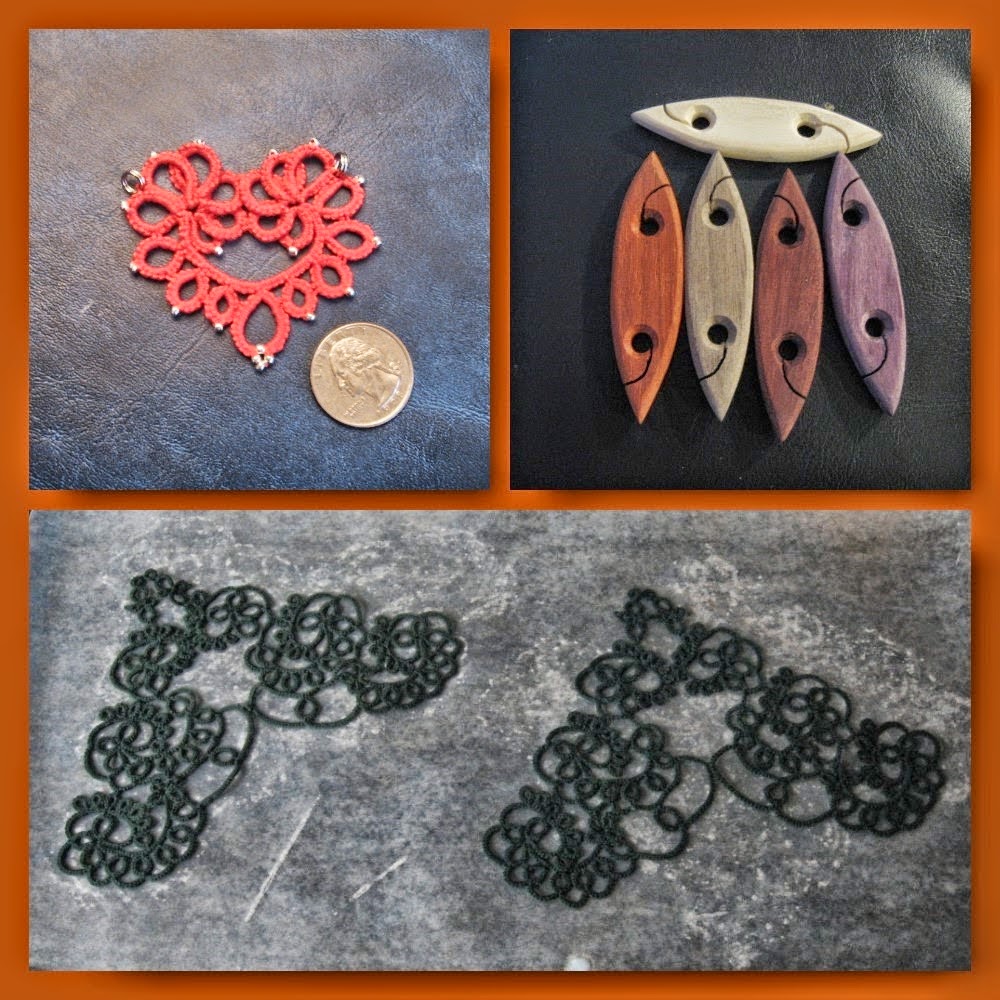 Wanda created a wonderful snowman doodle, but it didn't want to sit still to have it's hat and scarf put on. Have you ever tried to tie a scarf on a teeny tiny bit of tatting? 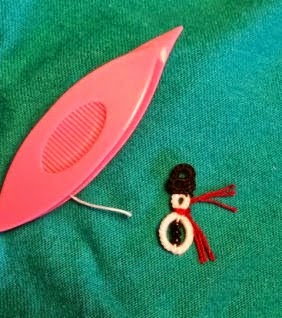