Muskaan coaxed some straight edgings into a circular shape as you can see from the decorations on these pillows. By adding & subtracting a few stitches at strategic places along the Down the Garden Path bookmark pattern by Pam Palmer she created a curve instead of a straight line. The Jessica bookmark edging was curved just by making the joining picots very small. Happy-Go-Lucky Frolickers edging in different sizes was the result of very small joining picots used in the inner sample and normal size picots on the outer sample. She notes that smaller picots used in the one shuttle edging used for her caftan helped to created the oval shape she needed. 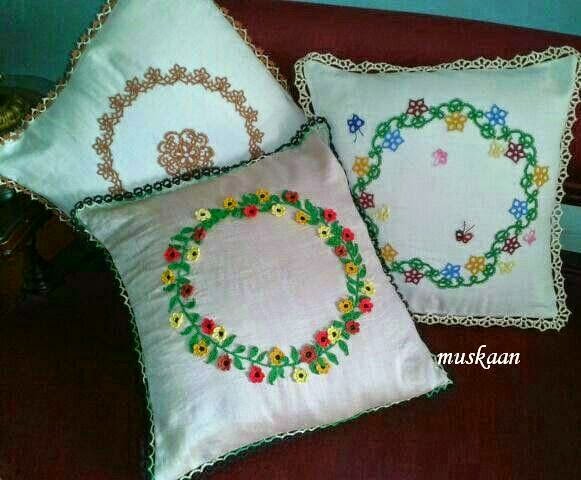 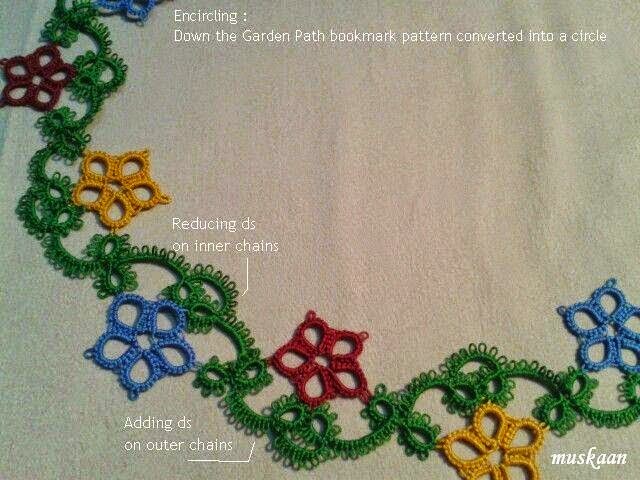 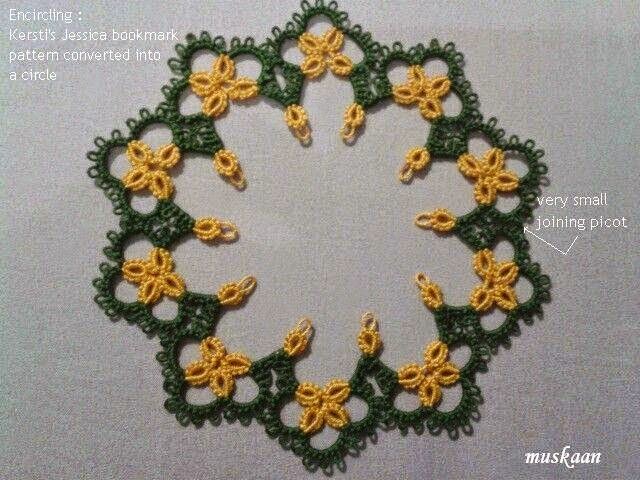 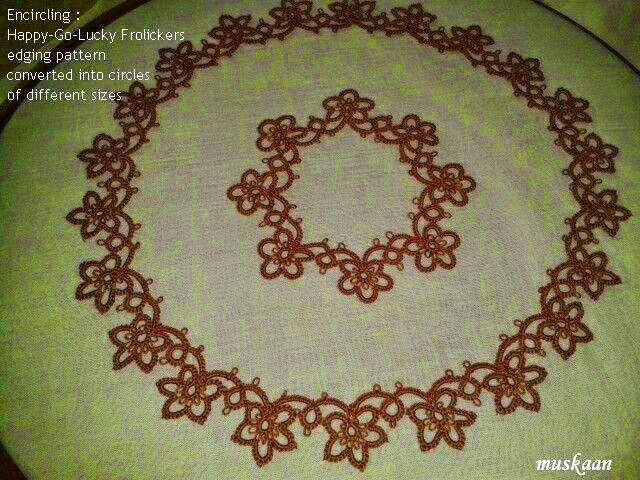 Sue shows some of the tatting she is sending off in various swaps. These Christmas ornaments are sure appreciated. 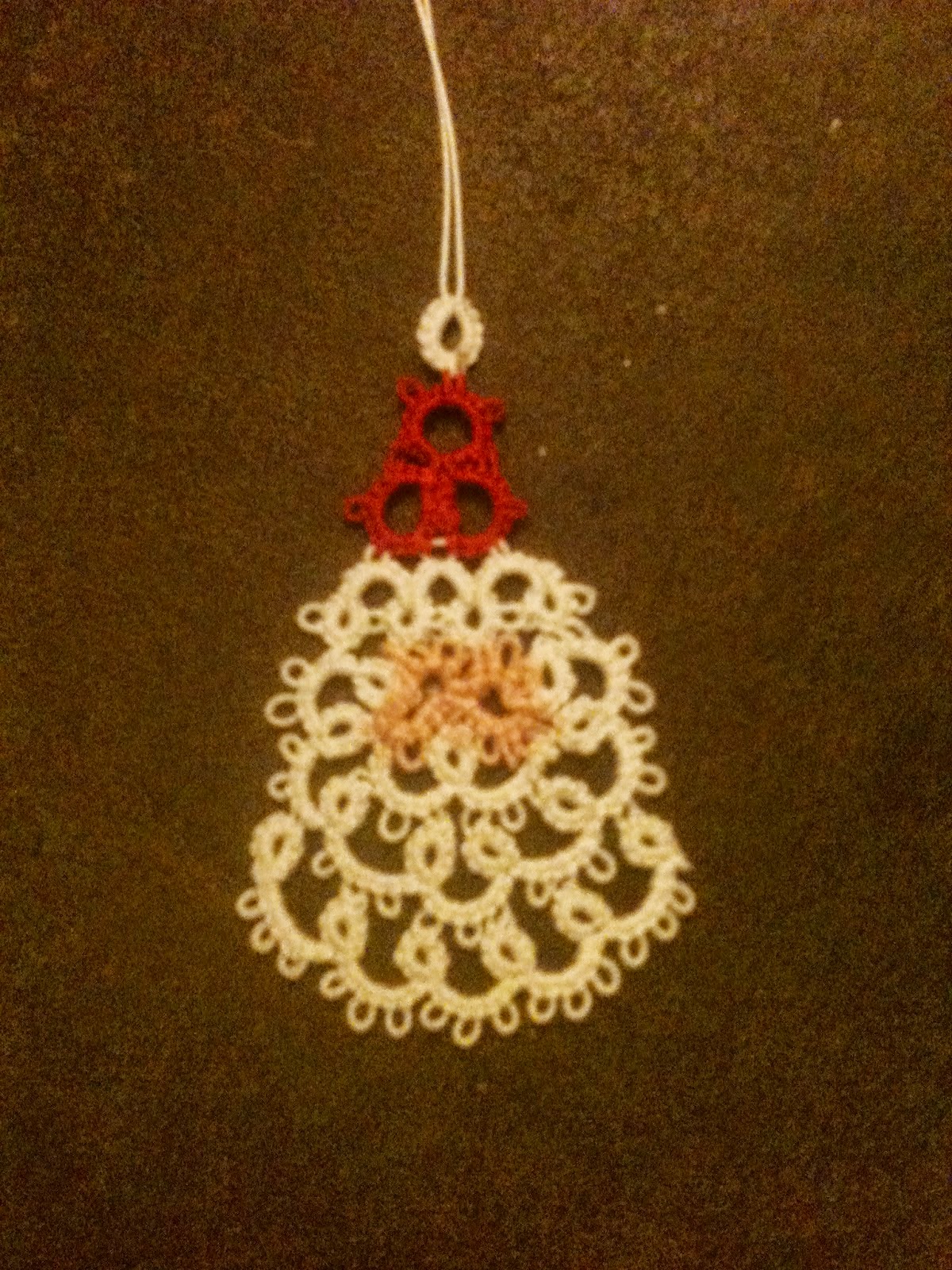 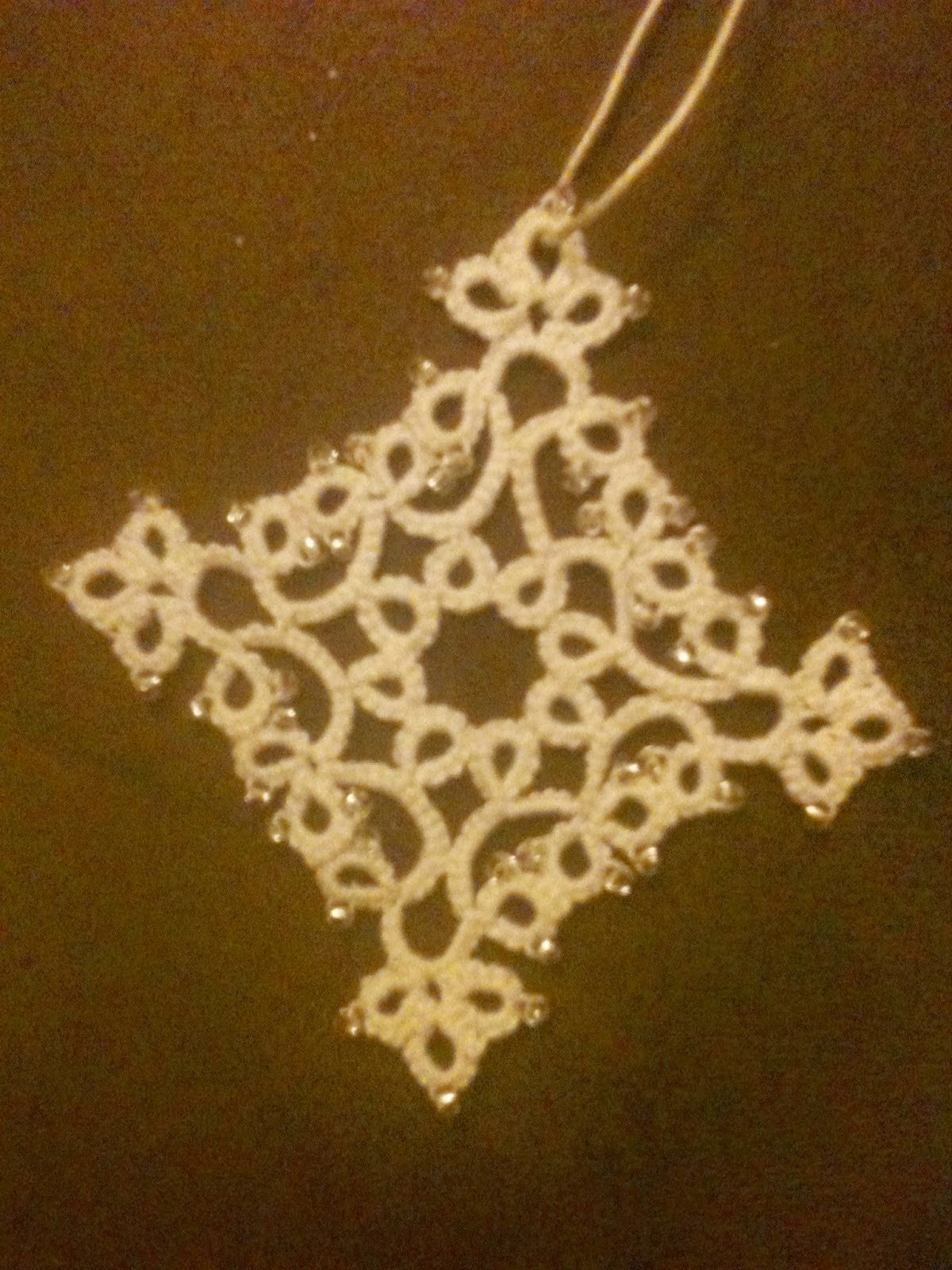 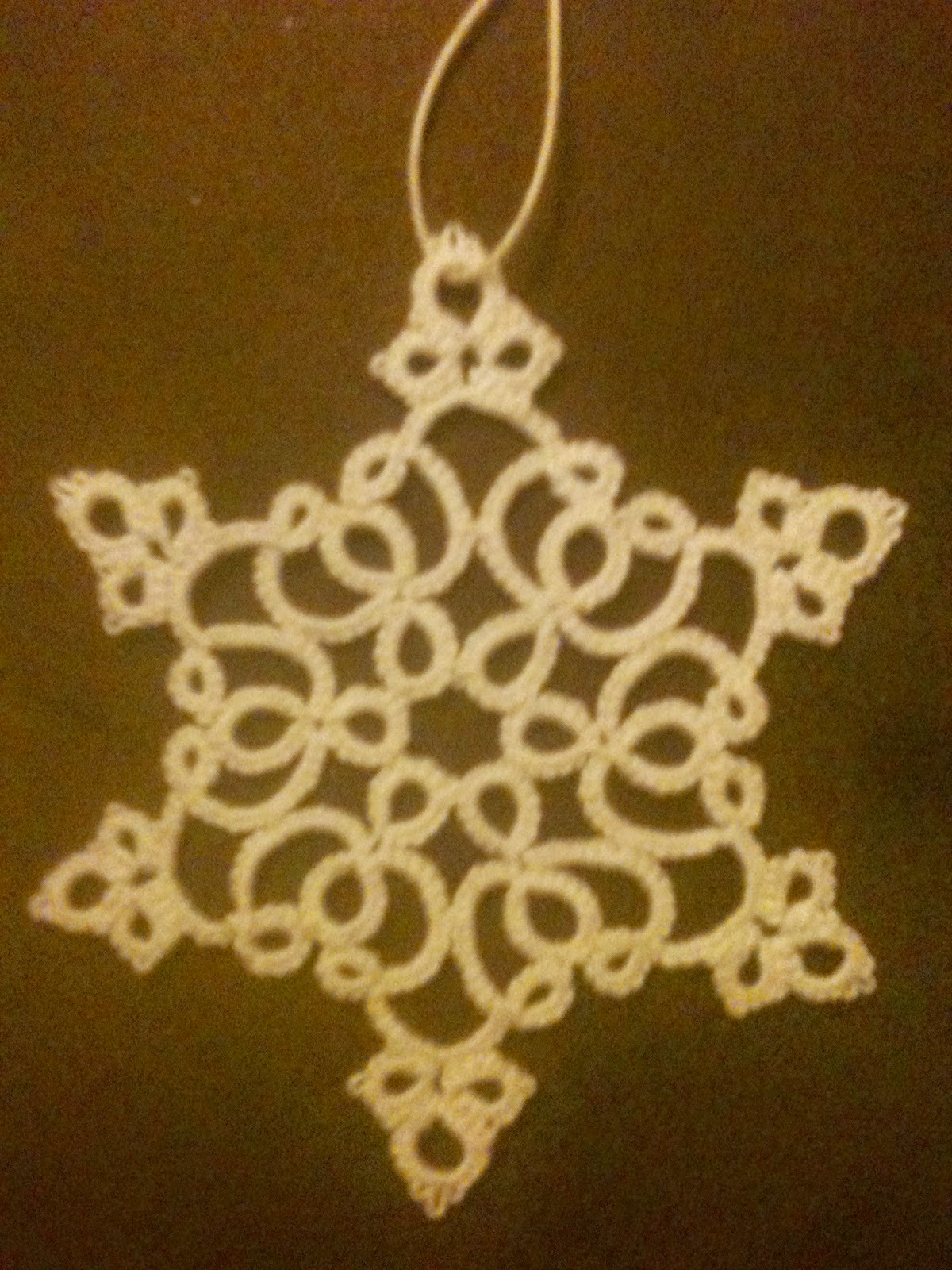 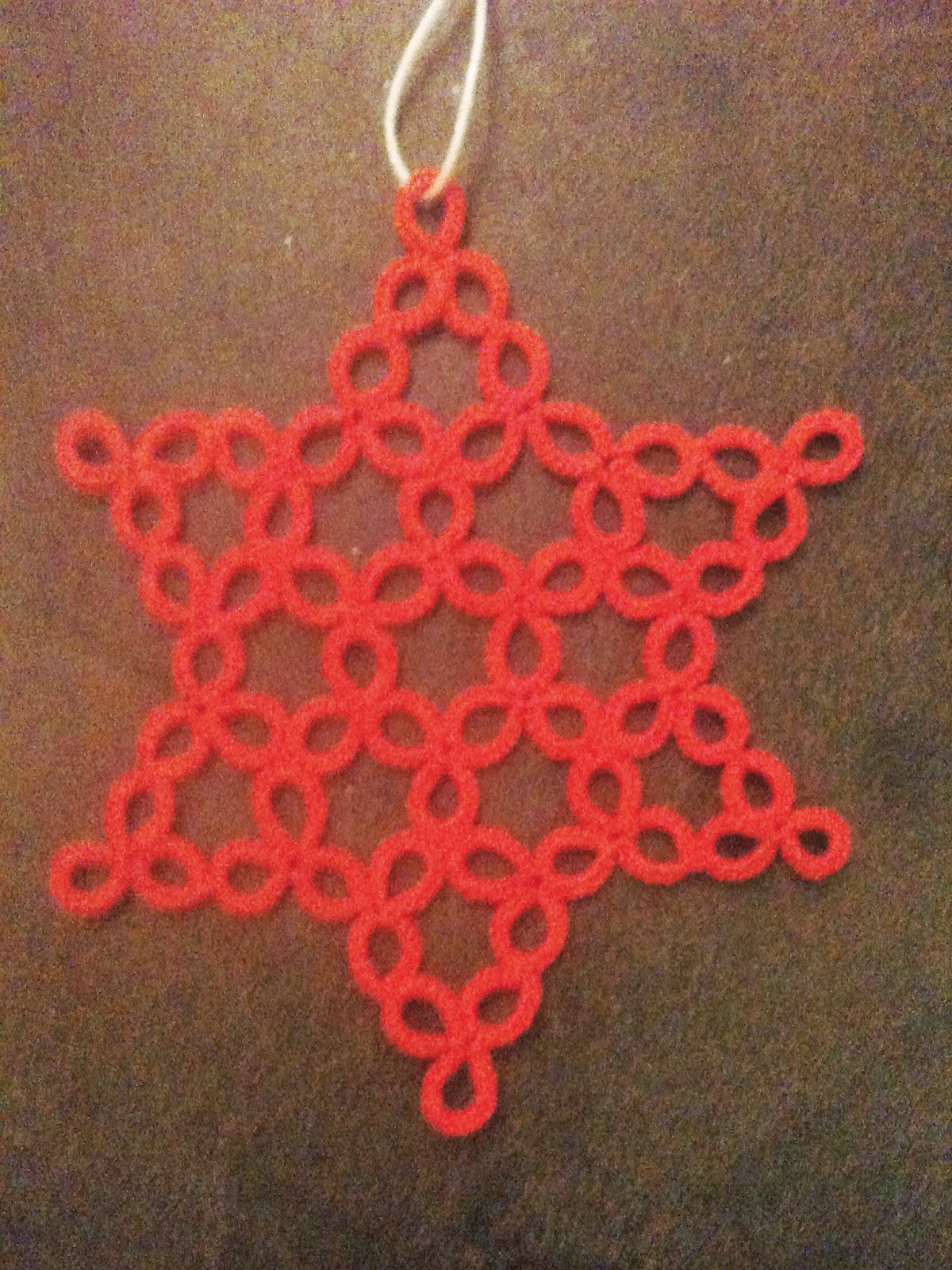 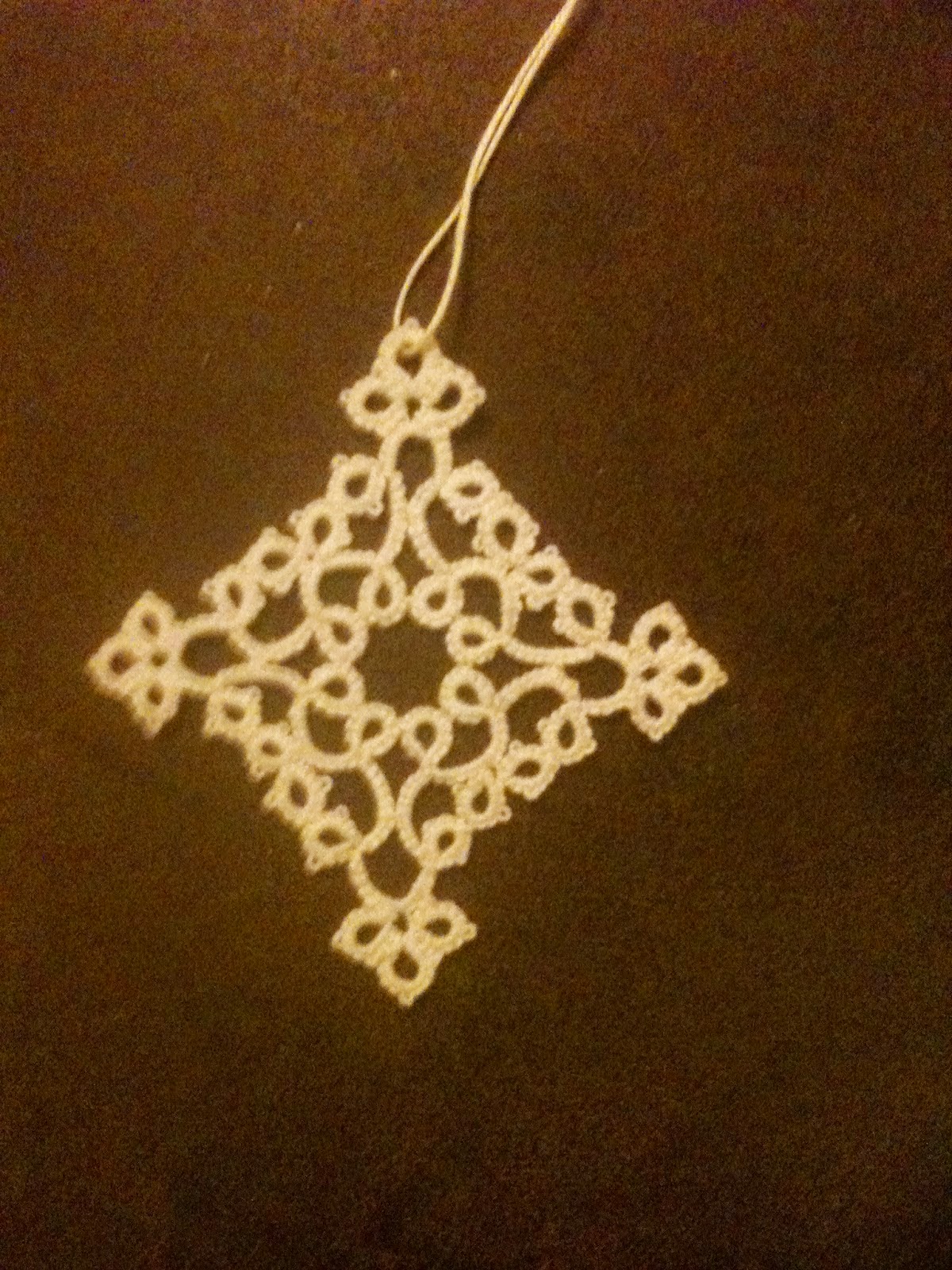 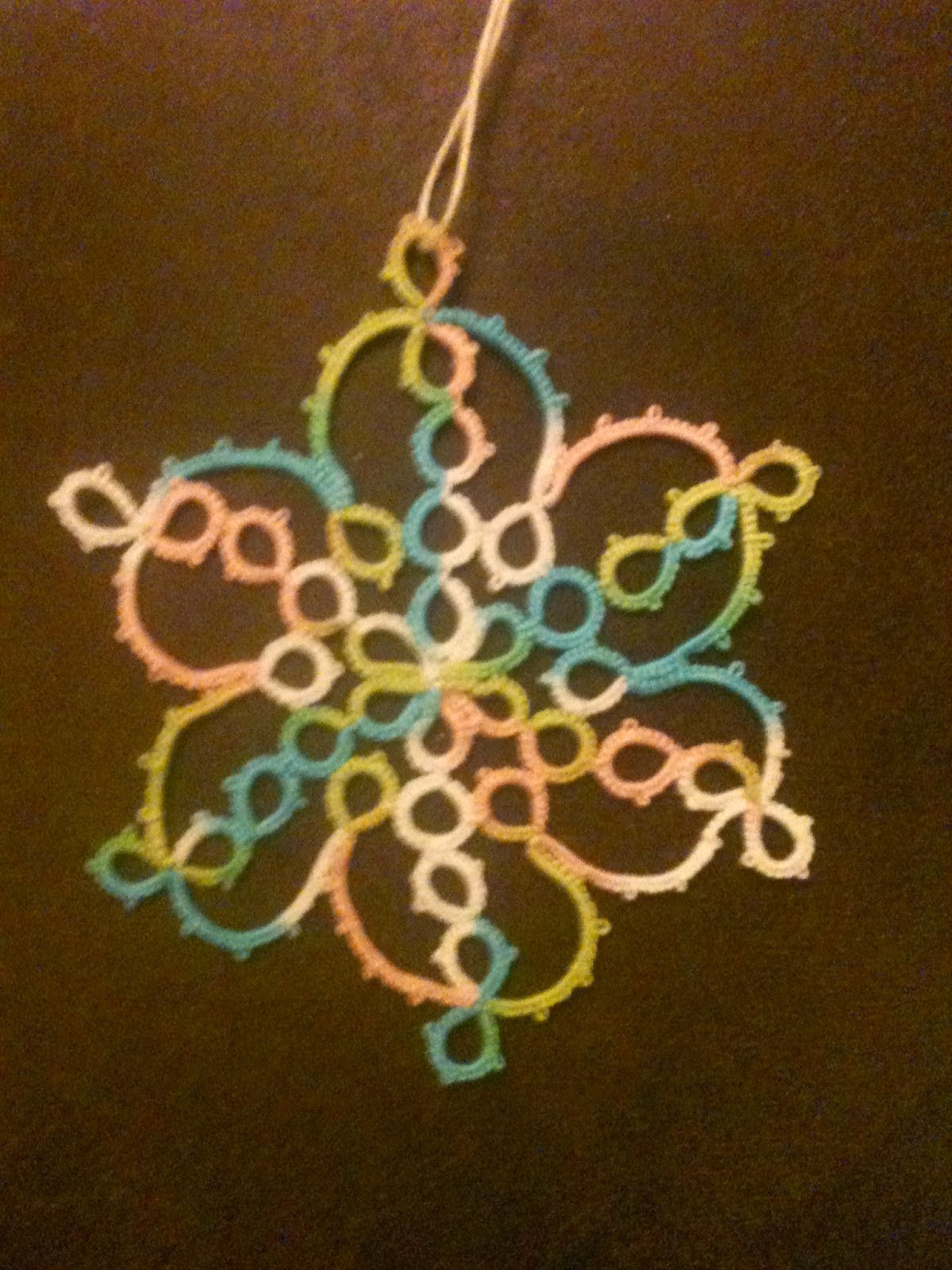 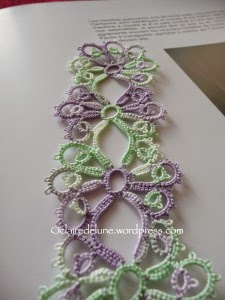 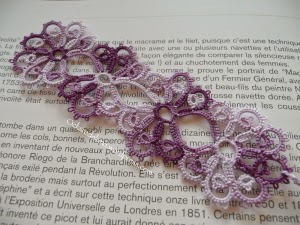 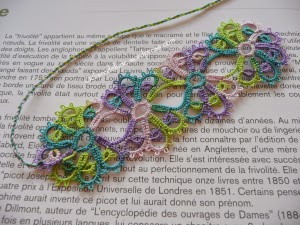 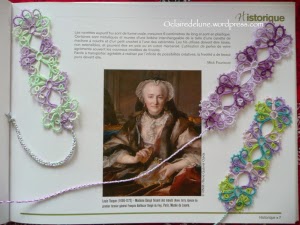 Fox is thrilled to approach the finish line on the Monster Doily and at this point she only has three more curved elements to tat on the last row. After 5 months of tatting here is the final product, a 27 inch monster doily designed by Jan Stawasz and tatted in size 12 DMC Perle. After all that work Fox blocked it, filmed it, packaged it up and put it out of sight because she's seen enough of it. It may have been tedious to tat, but WOW isn't it just gorgeous! 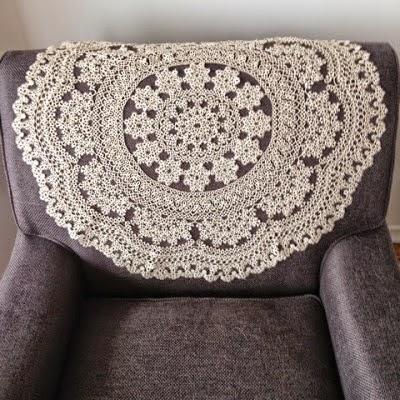 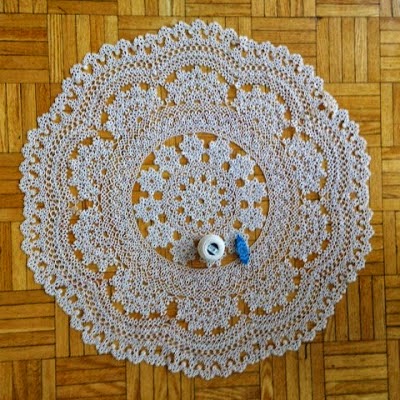 Kristen tatted the 4th, 5th and 6th of December from Lene Bjorn's 24 Snowflakes in Tatting. Since her blocking materials are already packed she improvised by pinning out her snowflake on the seat of a chair. The sixth of December was fun to tat with lots of interesting techniques. The seventh of December was tough to do with the onion rings, but very satisfying to tat. The block tatting on the 8th of December just doesn't seem to work out and she's wondering if anyone has managed to tat it, so while she's waiting for a response, she's moving on to the 9th. 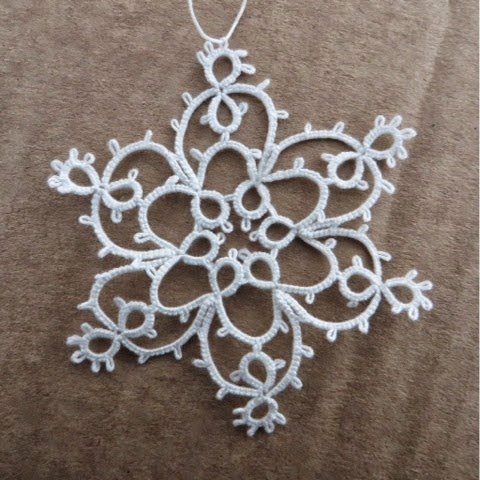 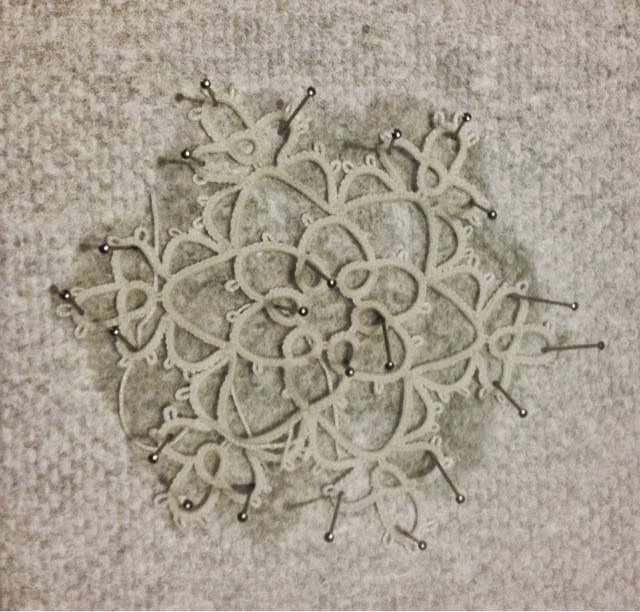 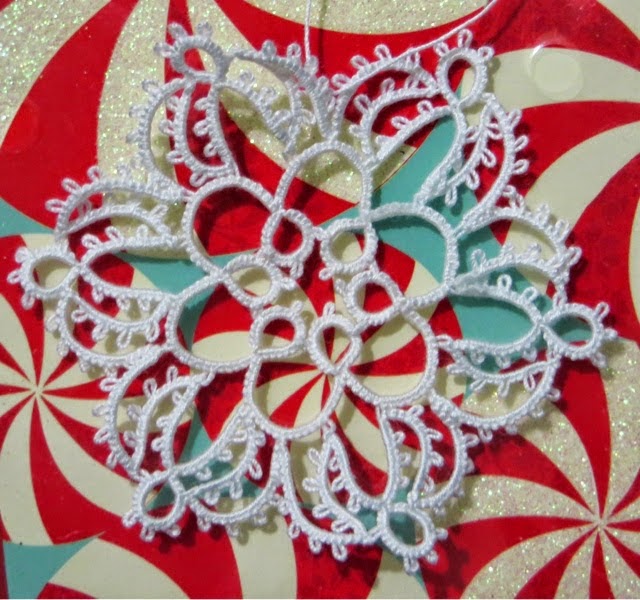 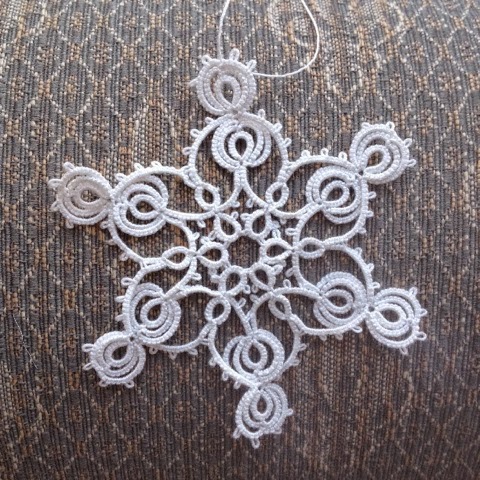 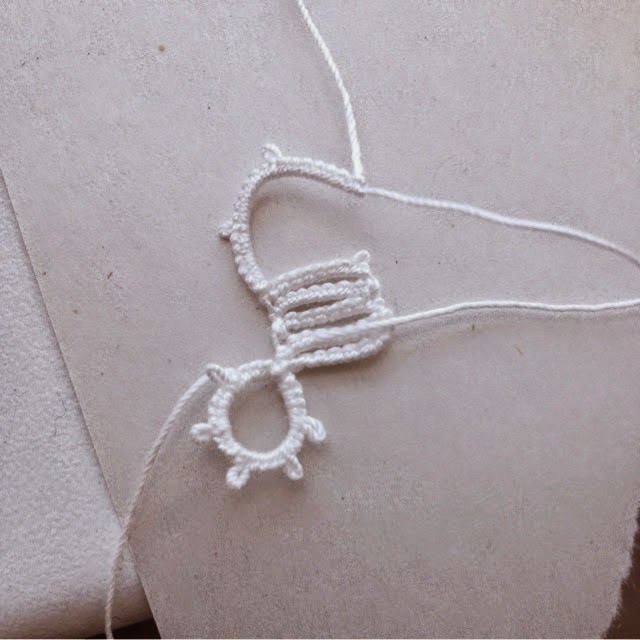 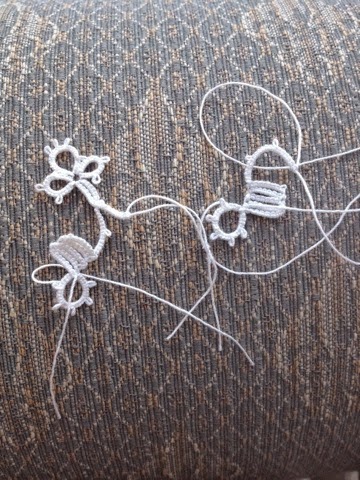 Margaret made this wreath pattern designed by Lady Tats which is done with one shuttle with red thread and one with green, where the berries are Josephine rings. Last year she used Red Burst thread by Lizbeth and Green  Flora thread, but this year she used white for the berries. Christmas bells are from a pattern by Wanda Salmans 2007 tatted using white Lizbeth thread no 20. Dew drop Pendant was tatted in white Lizbeth thread no 20 with varying sizes of clovers to form the shape. The same little pattern tatted in Lizbeth Purple thread no 20 has a Tibetan silver owl in the middle. 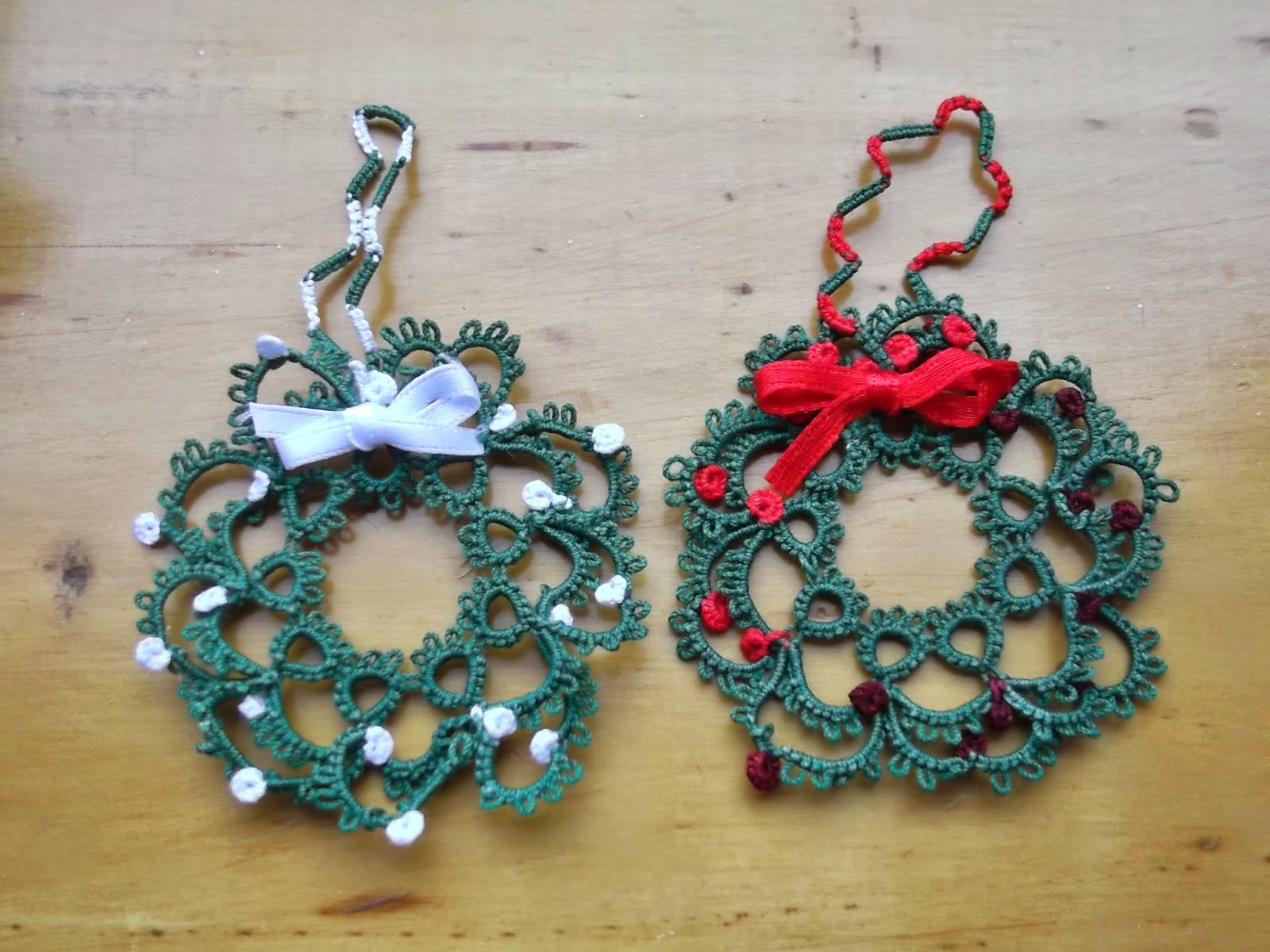 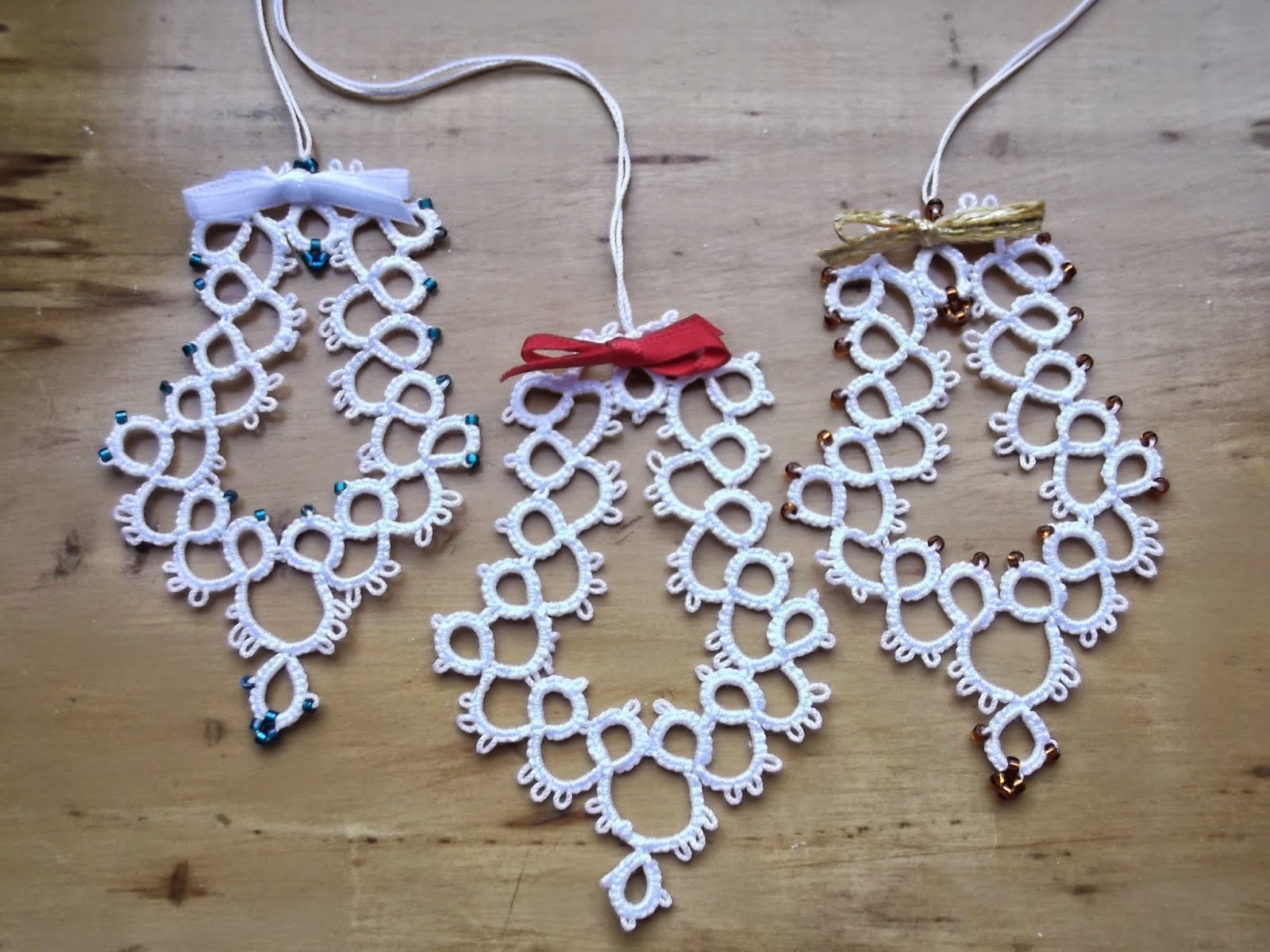 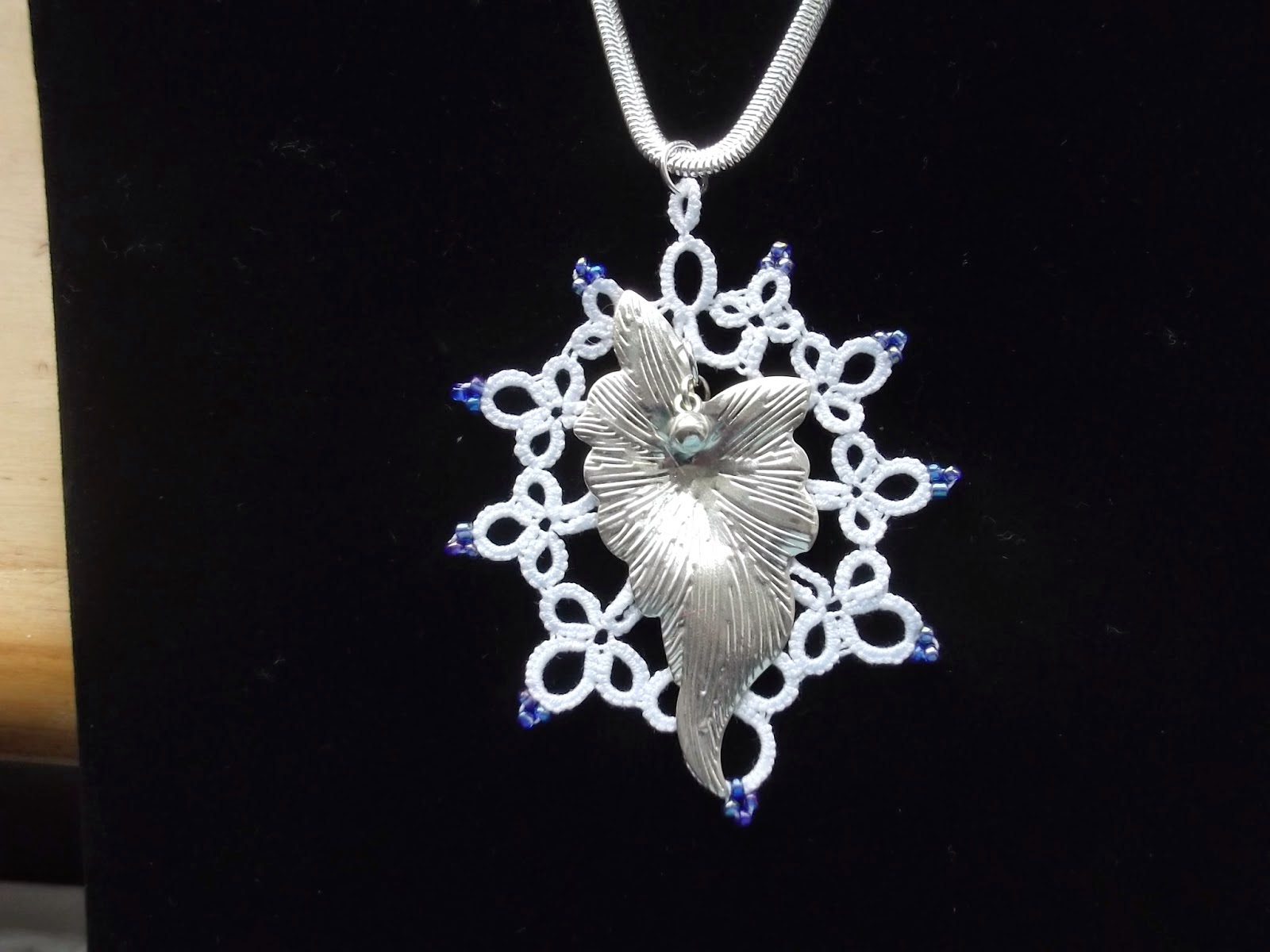 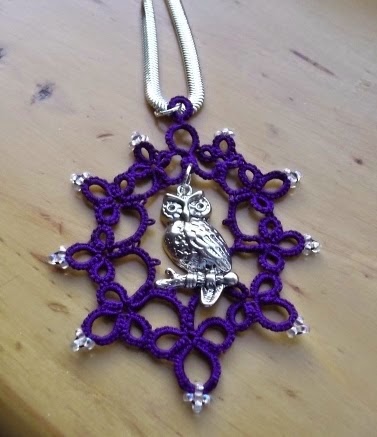 Marie tatted Double O Cross by Dee Powell which was a nice easy tat. She had to tat another train from Lady Shuttle Maker's TIAS.  Here is Jane's hummingbird pattern. It was so much fun she had to make more. 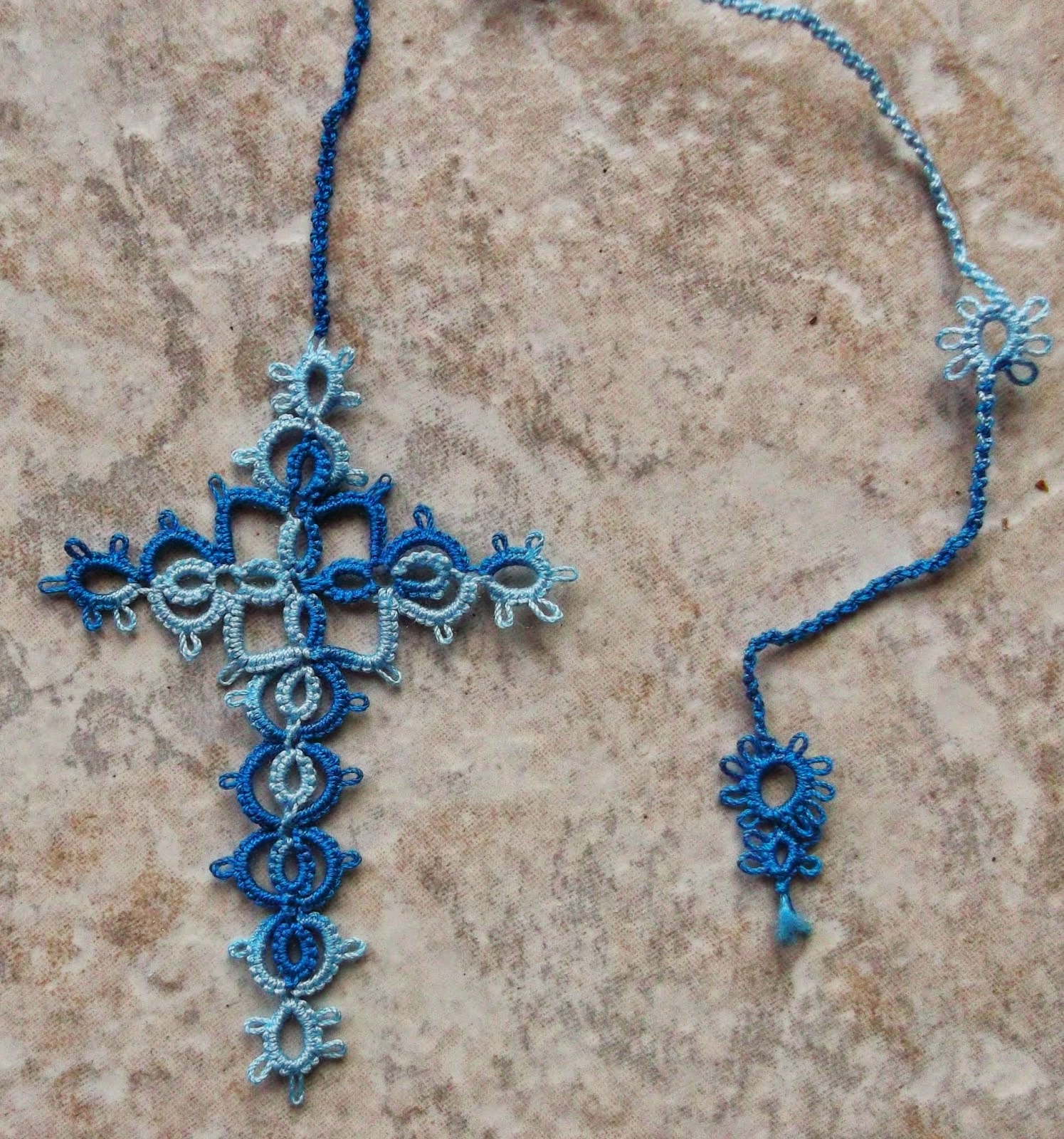 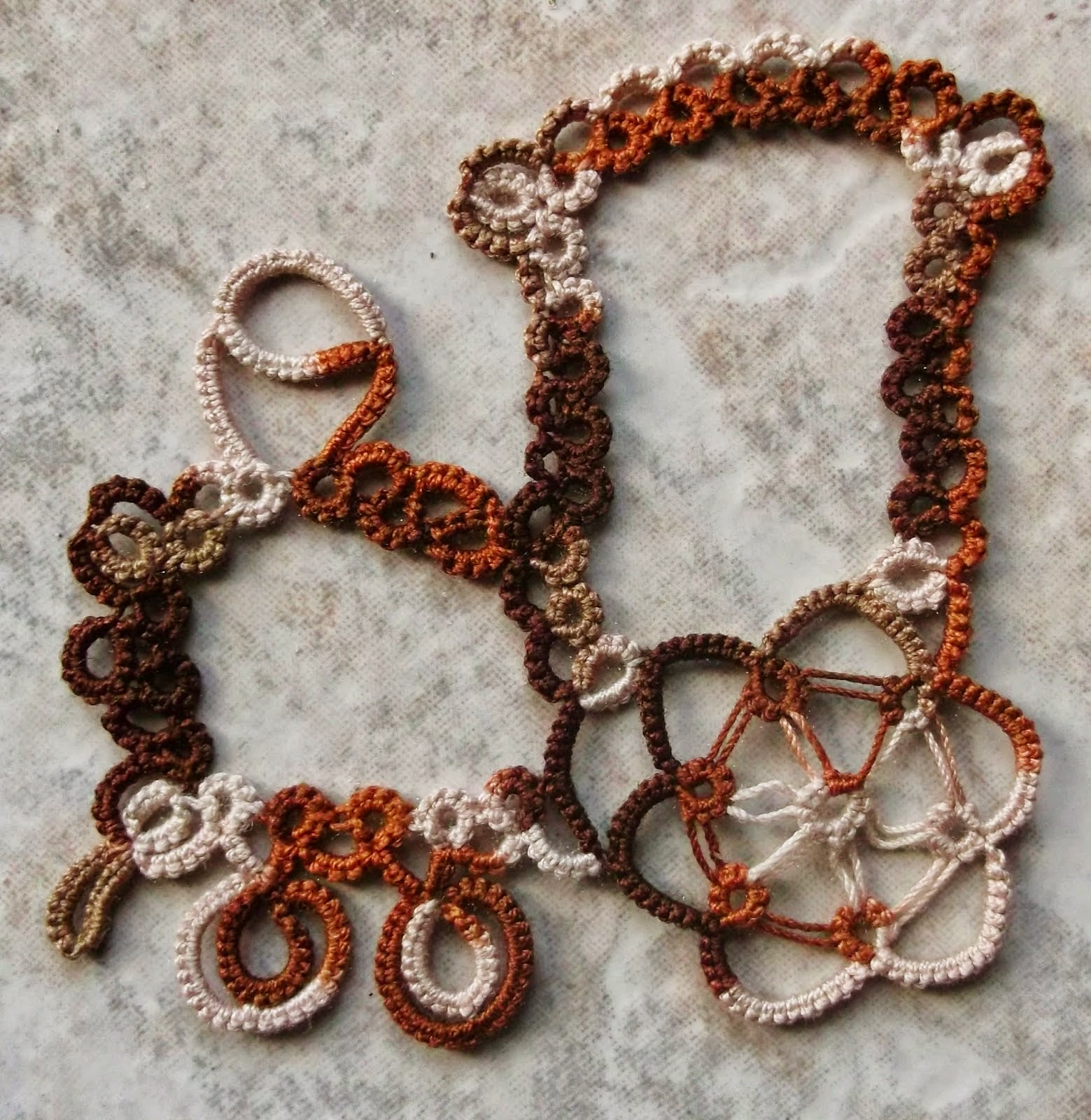 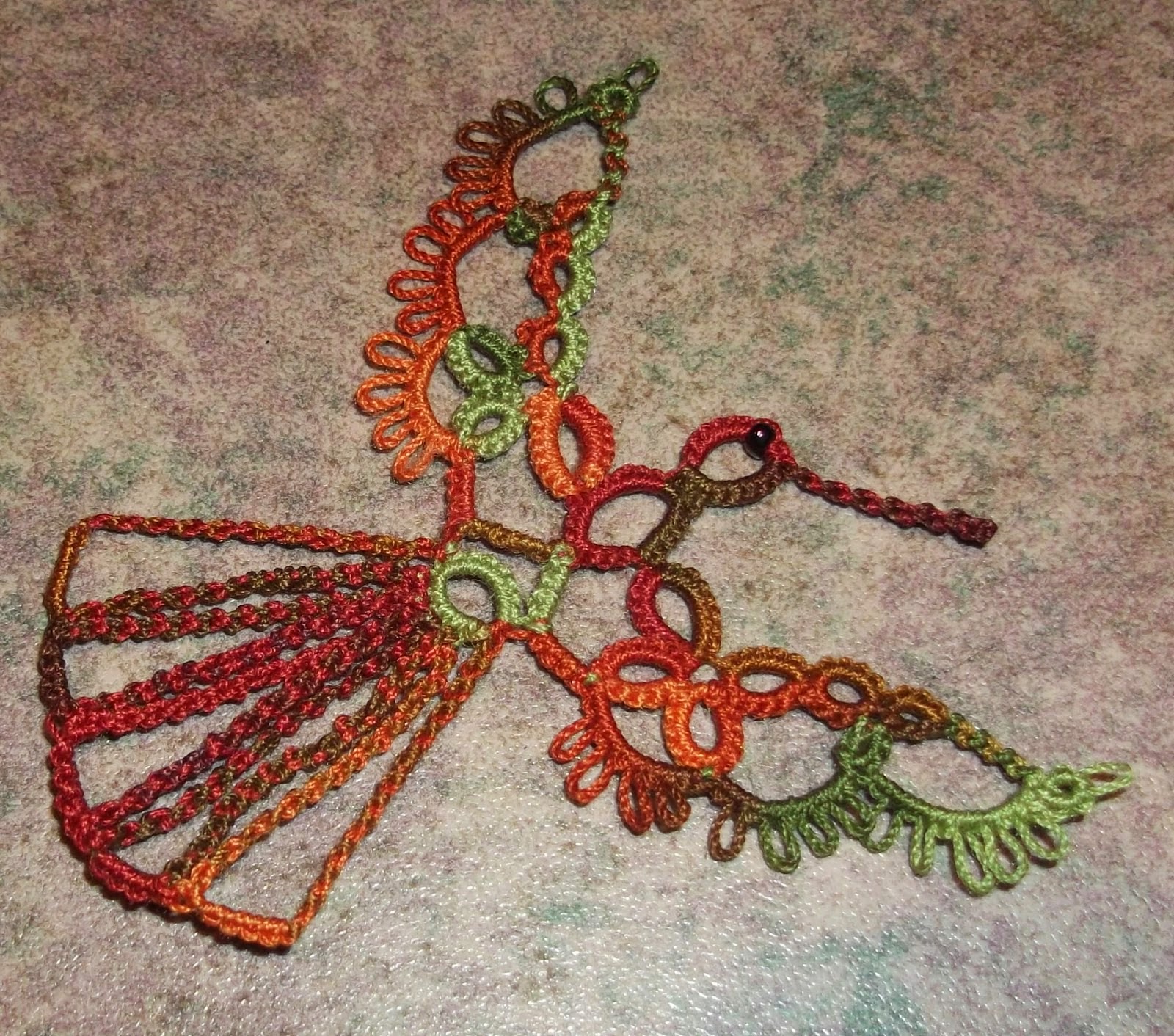 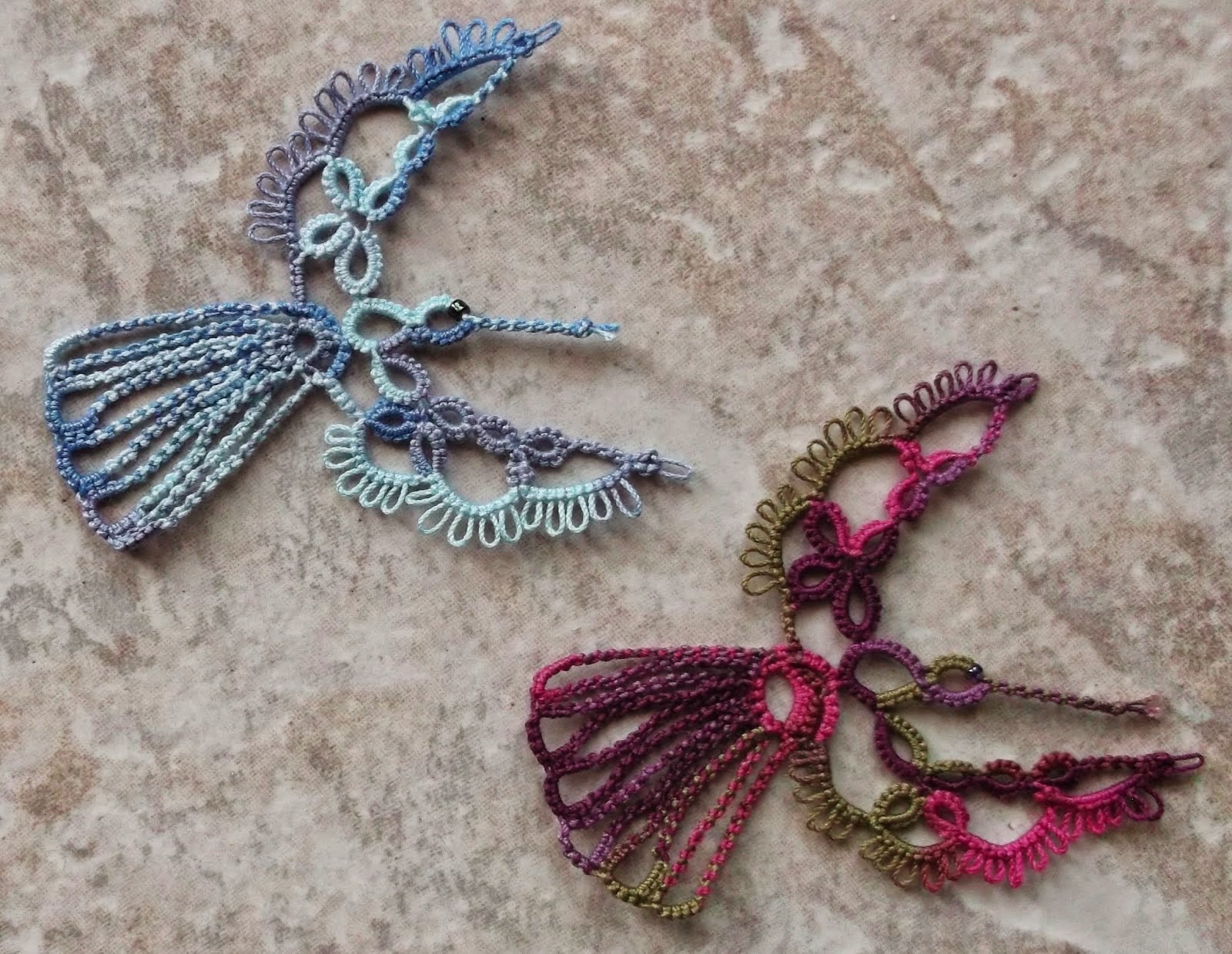 Wanda's customer was very happy with her bookmarks in school colours. Bethel College was done in Maroon and Grey and Oklahoma State University was done in Orange and Black. She added the ingredients for a simmering potpourri that called for orange rind, apple peel, cloves and cinnamon sticks to a bag decorated with a bit with burlap, lace, and buttons, then added a sprig of evergreen and a bow and a detachable tatted ornament for a perfect little gift for one of her neighbours.