Jane can't tell whether it's a difference in tension or picot size that makes her motif different from the picture in the book. She tatted motif 21 in different colourways in an attempt to show the structure off better. She liked the orange colour blips in the second motif, but avoided them in the outer round by using Catherine Wheel Joins. 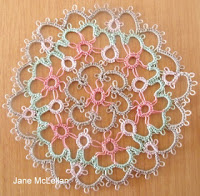 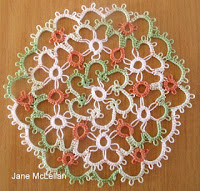 Sharon took a short break from the 2016 Spring doily to tat Yakut snowflake from Jon Yusoff's book Elegant Tatting Gems and she loves patterns that are just one round.

Eliz is pleased that her Concentric Rectangles Doily is turning out better that she expected as she hasn't really liked how the variegated thread looked before, but it's lovely paired up with matching solid colours. 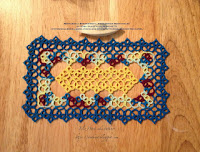 Elsa has added more tatting to her picture. The dress is embroidered with viscose ribbon hand dyed by Stef Francis. The grounds are made in tatting cotton pearl DMC 12 fixed on the canvas with satin acrylic varnish using a series of motifs and traditional patterns. 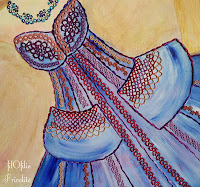 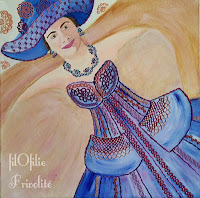 Diane hit the 2/3 mark on her Spinning Wheel Glass Mat. Here is the Mat finished. The next one is already started in the yellow Fiore thread. She's half way around the final row of her Concentric Rectangles Doily. Despite the busy time at the end of her last year, she has made some progress on the Rectangles Doily, as well as a bit more on the Spinning Wheel Glass Mat. 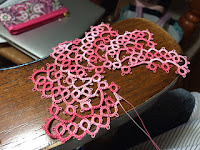 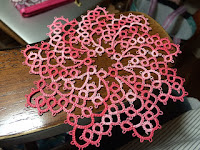 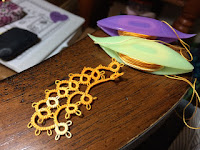 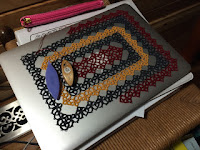 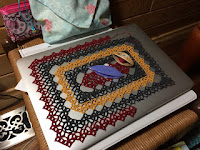 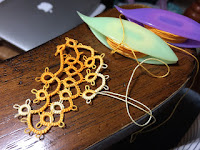 Fox is delighted that her jinxed doily finally arrived at it's destination and she's already moved on to row 8 of the Renulek doily. She had enough #50 HDT thread to get around the hankie, because it was such a simple pattern. 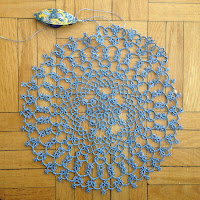 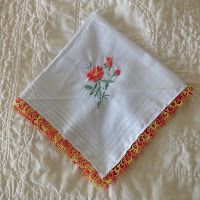 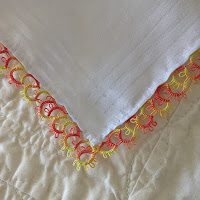 Marie luceted the chain and tatted around a doo-dad, she found at Walmart. This design by Dee Powell, called Heritage Cross is from the book called Tatted Bookmarks.

Sue is a little obsessed with wanting a good Broomstick Lace Butterfly. After three tries she thinks she's finally on the right track. 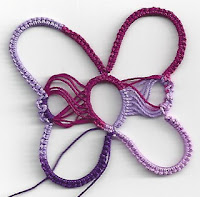 Wanda put tatted buttons on denim with a little lace and made cuffs for her daughters for Mother's Day. She started with a little denim, different button motifs, some scraps of lace and a few fabric leaves. They turned out wonderful.

Hi, Sharon. I just finished my first 25 for this year, and I'm definitely interested in starting again.