Jane finished round two of the Teiko motif, which looks less square than she expected, but maybe the transition and the next round will give the square look. It's looking a little more square and following Jon's suggestion she blocked the bare threads to zigzag to give it more interest. Motif 47 is much like 46 but she shortened the bare threads, which she could have shortened even more. The cream thread is Cebelia, as is the pink and the green is Milford; all size 20. Motif 48 really is square, larger than expected, 11 cm across in size 20 thread and would look good repeated. She joined the little corner flowers in the wrong place twice, catching the mistake quite soon the first time, but missing out one pattern repeat the second time, but she realized fixing the mistake was as easy as cutting off the corner flower. 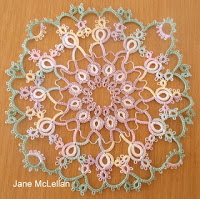 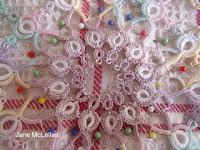 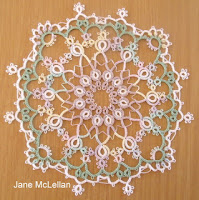 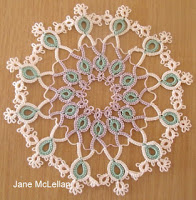 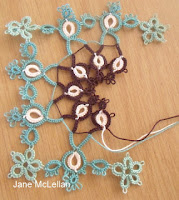 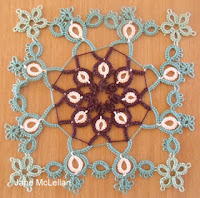 Nikki used a pattern from Tatted Bookmarks edited by Barbara Foster to make this choker in size 20 Lizbeth thread. She found it challenging to work in size 20 thread rather than size 10 and the dark colour made things doubly hard.

Batty Tatter used fabric glue to attach the previously tatted heart and a matching edging to this child's hat and as hard as the glue was to work with, I bet it's a lot easier than sewing the tatting on. 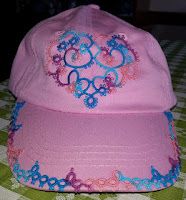 Sue chose colours to match her dress and made this bracelet, earring and pendant set using Jane Eborall's pattern.

Diane finished round 4 of Renulek's Napkin Marta without any problems using size 80 Majestic #833, in a very pretty shade of green. Round 5 is in size 80 Majestic # 825, a colour that she really likes. A visit from family she hasn't seen in a while meant that there wasn't a lot of tatting time, but she did get this round finished. She started round 6 of Renulek's Napkin Marta in size 80 Majestic #849, a colour that she loves, but it just wasn't working. Since pressing didn't improve it, she's thinking that she needs larger picots, or she'll have to play with the stitch count, but as it's the last row she'' be able to play around with it and make it work. 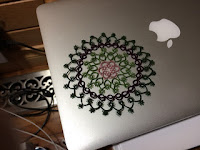 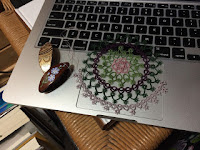 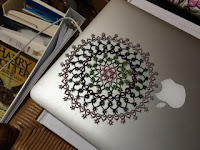 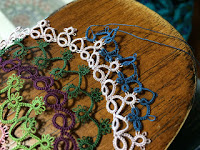 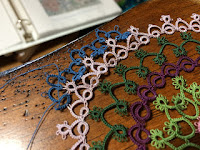 Fox decided that when an unfixable error was discovered in her last post, that she just couldn't stand the red colour. So she switched to softer colours and started again, but with more beads. 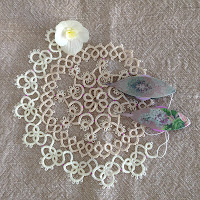 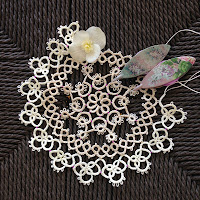 Marie likes the way the embellishment worked out on this pendant. This tatted piece was exchanged for two spools of thread. Tatting around this single earring turned it into a lovely pendant. 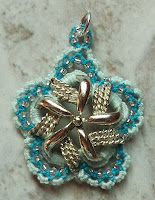 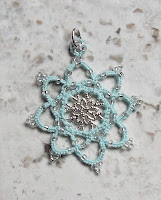 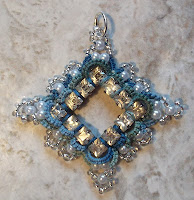 Muskaan is working through Renulek’s Wiosna 2016 and round 13, which finally stopped ruffling, is 14¼" in size 40 thread. Round 14 is 15¾" in size 40. Round 15 is larger than 17” and took much longer than she thought. Round 16 brought it up to 19 inches across and it was a quick and enjoyable tat mostly because of the lack of picots, but she did run out of thread frequently on this round. She decided to tat the last round in Anchor Mercer size 40 cream 0300 for the rings and shaded red/black 1206 for the chains. She had a couple of false starts, but soon got into the swing of things and the finished size is 21 inches. 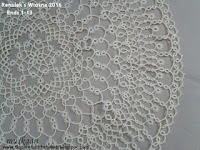 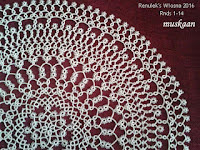 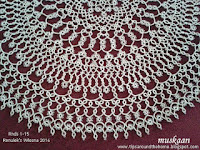 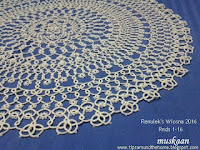 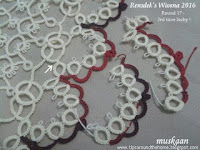 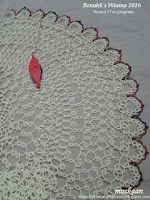 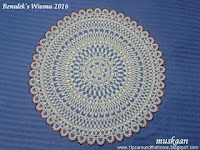 HisKid is tatting along on her doily but these outer rows are taking forever. She's about half way through this round. 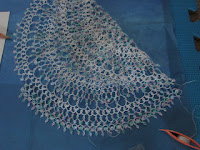 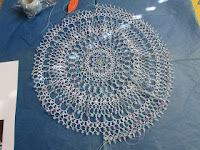