Sharon, the knotting nurse, is joining the challenge and has been working on tatting
Jon Yusoff's Merriment doily, which she did in two colours and is pleased how it turned out. 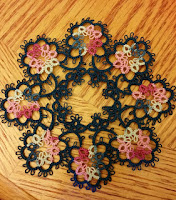 Pop Maria received these rippled beads some time ago and it took a while to create tatting to go with them, but here they are assembled into a floral pendant. 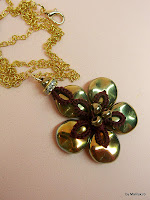 Eliz only has another 5 repeats to go on the Norma Benporath doily, which she is tatting in a bright sunshiny yellow. She made the Tatted Bluebird by Nancy Tracy in size 10 Manuela thread, accidentally omitting 2 ds and a picot in one of the rings and she adapted the pattern to practise an inward-facing picot for the beaded eye. She did an impromptu demonstration with a selection of her finished pieces for display. 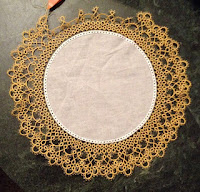 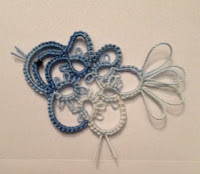 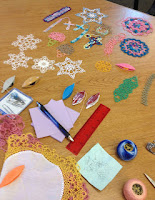 Elsa continues working on her mixed media picture, using a hand dyed ribbon to outline the brim of the hat and filling it in with mignonette-like tatting. She uses a traditional wheel and part wheel shapes, in Ankor size 12 pearl cotton and Gutterman polyester thread in colours to match, scattered across the crow of the hat. 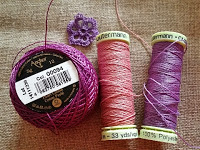 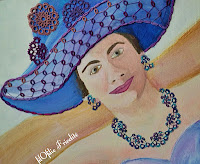 Diane made some progress on her Spinning Wheel Glass Mat. Then the next day she did very little. Every little bit helps and she has only 2 spokes to go. 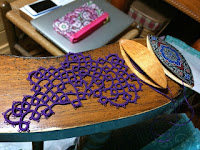 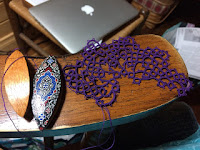 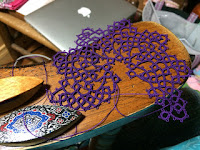 Fox suddenly realized that after waiting and complaining about not being able to work on her doily because she had no thread, that her enthusiasm for working on it had disappeared. Don't worry though, she found it again and has three of the twenty repeats already done. 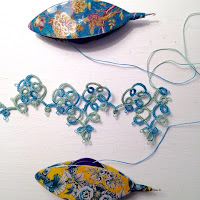 Marie was looking for an Ankars-style pendant, and came across CM-Handmade's Pendant that she added 6-mm, pearl beads on the outer pedals to give it more depth, still using three strands of sewing thread. She made another one as a focal point, added her "Rosey Earring pattern" for the sides and created a matching bracelet. 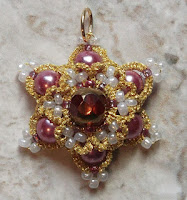 Martha is deep in creation mode, I wonder what it will be? 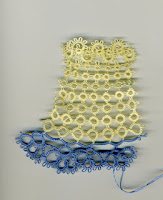 Muskaan found the Sixth Day of December Snowflake by Lene Bjorn to be challenging doing directional tatting and split chains to climb into the next round, especially when she climbed out at the wrong point...twice. And the SLT disfigured the lace, so she abandoned it in favour of working with a different colour. She shows detailed pictures of the work on the next round. The final result is a wonderful piece of lace with a dramatic dark row that makes it pop out at you. 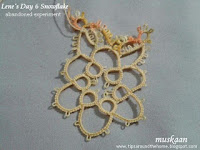 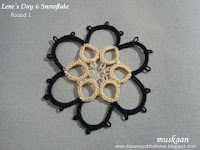 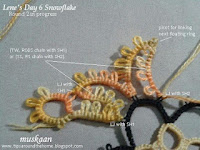 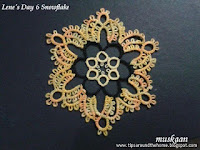 Sue has shared some blurred images to keep us guessing, but Star No. 1  Tatting Patterns and Designs by Gun Blomqvist and Elwy Persson is finished and shown here in size 40 Sunset HDT from AlenAleaDesign. 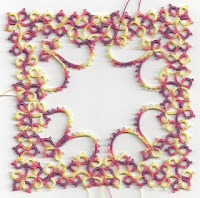