Chantal joins the challenge with a tatted poppy she created for Remembrance day in honour of her father, starting with a base by Jon. Then she designed a second petal and a leaf to go with it. Adding a pin to the back makes a lovely wearable poppy. 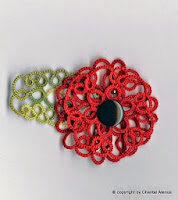 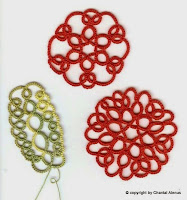 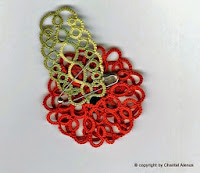 Muskaan continues her motif play showing how different segments of the magic square can be utilized as triangles. The square design has been done in 4 colours showing 4 triangles. This triangular sections was used to decorate the collar of a dress. She arranged Josephine rings, which are often denoted as Josephine Knots or JK in other patterns, in a perpendicular fashion to make the centre and buds of her Tiny Heart Poppy flower and she has added a tutorial to her blog. 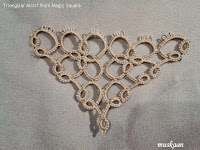 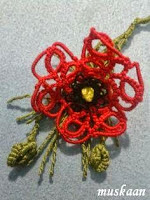 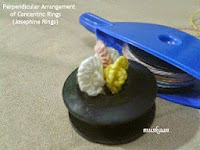 Erisnyx started in size 10 with this critter's legs and went on from there making this excess thread project. Standing about four inches tall at her snout, this three dimensional "dragon thing" as she calls it, has a wingspan of seven inches from wingtip to wingtip. After making the legs, she began the body at the tail and worked her way up to the neck. After she made the head and attached it she made the framework for the wings, and lastly the membrane which was sewn onto the body. 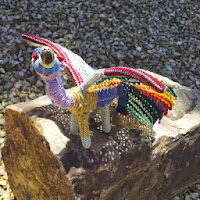 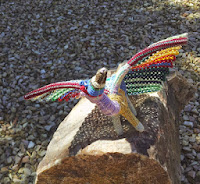 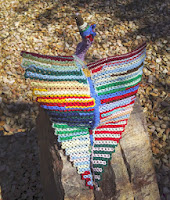 Lilas drew this design and then tatted it in black thread with tiny red beads. A simple and elegant pendant with matching earrings. 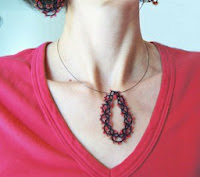 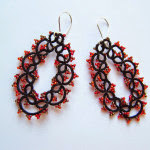 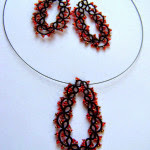 Sue tatted Jane Eborall's design for the Inside Out Snowflake and she has plans to put a bead or something in the middle. The next design is from the ROT Pattern of the Month Club but she has replaced picots with beads and the top still needs doing. 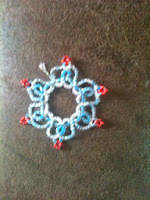 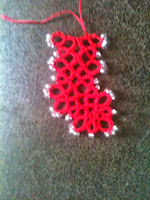 mb duke made several more pendants and earrings based on Ewa's pattern with modifications. Here are the earring to match the pendant done in  Perfect Quilter in red and beige. She liked how it turned out so she did another set in size 70 vintage Coats and Clark purple size 70 and Oren Bayan colour #4433 (the dark purple). Mirabelle from La Cosette made a lovely pair of snowflake earrings in size 80 Lizbeth thread in white. 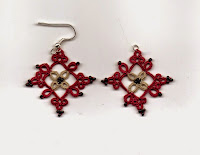 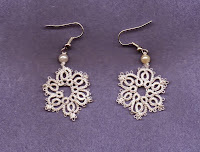 Fox thinks she miscounted, and for once it's to her advantage, as she's on the 16th round and there are only 18 rounds in the Monster Doily. It's taking forever, but it is progressing. It may be boring to tat, but it's getting lovelier by the inch. She started on a design from DMC's Festive Tatting but the pattern was a stinker to follow so she's just doing her own thing and improvising as she goes, otherwise known as designing. 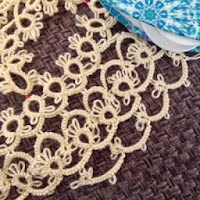 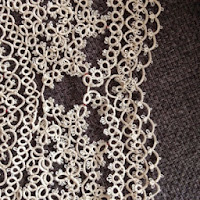 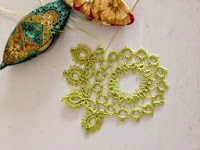 Marie used two strands of Coats and Clark, silver sewing thread around a blue cats-eye to make this Arctic Pendant. The pendant needed matching earrings. Here's another variation of the same pendant, followed by a picture of both pendants and the earrings together. 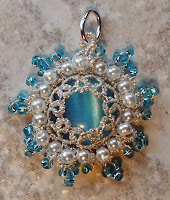 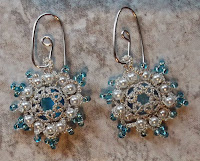 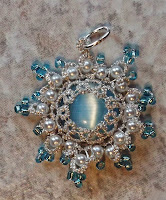 Martha needed a change of pace and worked a few of Jane's patterns beginning with her hummingbird and added in a third shuttle trying to work it all in one pass. The bottom design is Jane's Inside Out Snowflake.

HisKid has over 200 motifs done for the tablecloth already!!! She has been doing some test tatting for Elaine P. Gan a motif and a necklace, both of which are interesting designs. 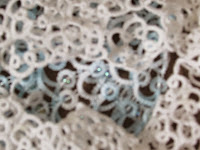 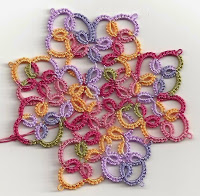 Wanda has made another lampshade with a tatted edging, this one in Lizbeth black, size 20, that features a button motif on the side.